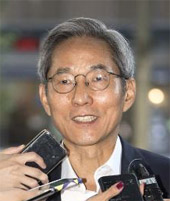 Yoon Jong-kyoo, current chairman of KB Financial Group and CEO of KB Kookmin Bank, is poised to win a second term as he became the sole candidate in the nomination screening process late Thursday.

KB Financial Group announced three shortlisted candidates, but the other two - Yang Jong-hee, president of KB Insurance, and Kim Ok-chan, president at the group - pulled out of the race. If Yoon passes the final interview, he will serve the three-year second term to head the country’s largest financial group by assets.

“I am preparing to explain what I can do as a chairman and will try my best to get the final approval,” Yoon said on Friday as he walks toward the headquarters of KB Kookmin Bank in Yeouido, western Seoul.

Market observers see the chances of approval as high since he is credited with pulling off sound profits across affiliates and operationalizing the merger between KB Investment and Securities and Hyundai Securities, one of the key tasks facing the financial holding unit. The group launched a combined unit renamed as KB Securities earlier this year.

Yoon’s imminent challenge, however, is to weather opposition from the labor union. Union members at KB accused the management under Yoon of meddling in an approval survey about the incumbent chairman, saying that it altered results using multiple IP addresses.

The intervention, they say, was intended to raise favorable ratings for the current chief. The members also noted that the nomination screening process was far from transparent, saying the company did not reveal who applied for the top post in the initial phase.

The union took a further step to confront the existing leadership by reporting Yoon to the police for intervening in the industrial action of the union. As Yoon edges closure towards reappointment, the focus also moves to who will lead KB Kookmin Bank.

The financial group originally had a separate leader for the banking unit, but a leadership feud in 2014 between a group chairman and the bank’s CEO halted the tradition and allowed for double positions for a chairman.

But from within the group, there were voices that the leadership be split as KB Financial Group expands in the range of business segments and assets. Also, the share of non-banking segments has increased after the merger.

Chairman Yoon said that the board of directors is already in discussion to decide the issue.

“As for the issue, [I am] talking with the board of directors,” Yoon said, “If things are decided, we will announce it.”

The final interview and decision will be made on Sept. 26.