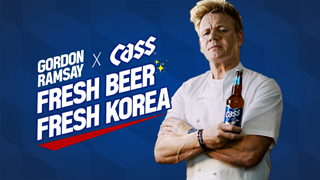 He is seen enjoying Cass beer and dishes such as fried chicken, samgyeopsal (grilled pork belly) and pizza in the commercials with Austin Kang, a semifinalist in the fourth edition of the Korean reality cooking competition show “MasterChef Korea.” The commercials were shot at a Korean restaurant in Los Angeles.