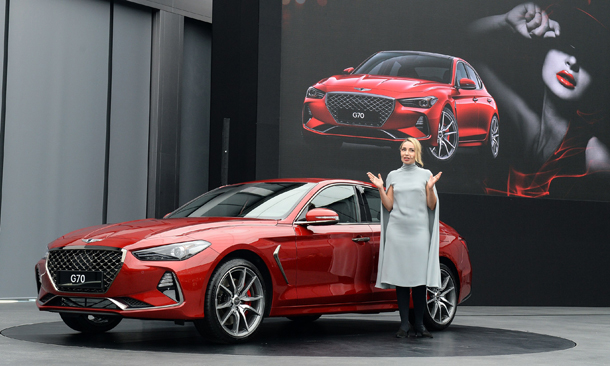 Bozhena Lalova from the Genesis Color Team delivers a presentation on the G70 on Friday at the launch event in Hyundai Motor’s Namyang R&D center in Gyeonggi. [HYUNDAI MOTOR]

In a sense, Hyundai Motor’s new Genesis G70, which launched in Korea on Friday, is a continuation of the automaker’s focus on luxury, but in another, it also represents a new start.

The G70 is the third model in the luxury brand’s lineup, but it is the first to be solely developed by the Genesis team since it was spun off from Hyundai Motor in 2015.

Its first two models, the EQ900 (also known as the G90) and G80, were already in mass production under Hyundai Motor when the spinoff was announced.

“The G70 launch is an important milestone for the Genesis brand,” Manfred Fitzgerald, head of the Genesis brand, told reporters at the launch event on Friday in Hyundai’s Namyang R&D center in Gyeonggi. “It [Genesis] is a new kid on the block.

“Aside from the sales objective, we will focus on establishing it as the first Korean premium brand in the global market.”

Genesis is hoping to capture a younger demographic with its G70, a necessary move if it’s going to compete against German rivals like BMW and Mercedes-Benz in both domestic and overseas markets. Ahead of its official launch, Genesis had already identified the BMW 3 Series and Mercedes-Benz C-Class as its main competitors.

Of the three sedans in the Genesis lineup, Luc Donckerwolke, senior vice president of Hyundai Design, said the G70 has been designed to be the most athletic. For a sportier look, the automaker has lowered the car’s height and overhang and designed the trunk lid to slightly resemble that of a race car.

The model is equipped with three engine types: a gasoline 2.0 liter turbo, diesel 2.2 liter and gasoline 3.3 liter turbo. The six-cylinder 3.3 turbo will be separately marketed as the G70 Sport.

For the first time in the Hyundai Motor Group, the G70 has been equipped with an artificial intelligence infotainment system developed in collaboration with Kakao, operator of the KakaoTalk messaging app.

The system, which can recognize human voice, can tell a driver about the nearest restaurants and shopping venues. It also inherits the G90’s smart seat adjustment system, which recommends the best seat position based on the driver’s height, weight and driving pattern.

In terms of safety features, the entire trim is equipped with nine air bags. For pedestrian safety, the automaker said the vehicle’s hood has been developed to automatically rise to minimize damage on the pedestrian in case of a collision.

The G70 offers a hint at how Genesis’ future lineup might look like. Underneath the brand’s signature crest grille, an extra air intake has been installed with a pointed angle on the bottom. A Hyundai Motor spokesman said this is an intermediate design step toward completing the V-shaped grille that was showcased in its concept GV80 car unveiled at New York Motor Show early this year.

The front and rear lamps have been renewed to incorporate two slim LED DRLS on each side, which the company said are another factor that implies the future design of Genesis lineup.

The way Genesis communicates with potential customers has taken a fresh turn with the G70 as well. To celebrate the launch, Hyundai Motor threw a concert in Seoul with artists including Gwen Stefani and Andra Day, an unprecedented marketing strategy for the automaker.

“Interacting with customers is a key for us to become relevant,” Fitzgerald said. “We want to become a desirable brand. We want to blend into life and make positive changes.”

Sales of the G70 will begin in Korea on Wednesday. The U.S. launch is scheduled for late in the first quarter or beginning of the second quarter next year.

Lee Kwang-guk, executive vice president of Hyundai Motor’s domestic sales team, put the annual sales target of the G70 at 15,000 cars. In the first half of this year, the Genesis sold 27,000 G80 and G90s in Korea, coming in third in Korea’s import car market after Mercedes-Benz Korea and BMW Korea, which respectively sold 37,000 and 28,000 cars.