Australian envoy finds true success at work and in love

Australian envoy finds true success at work and in love 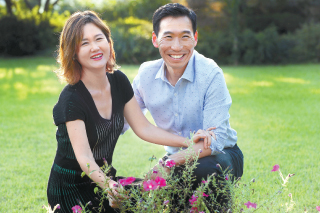 Australian Ambassador to Korea James Choi, right, and his wife, Joanne Lee, at the garden of their residence in central Seoul on Sept. 1. [OH JONG-TAEK]

After meeting in Korea 20 years ago at the Australian Embassy in Seoul, they married right before the then-third secretary returned to Seoul as the Australian ambassador to Korea.

“Joanne was also working at the embassy in Seoul at the time,” said James Choi, the Australian ambassador in Seoul. “We kept in touch through the years, as both of us moved around all over the world.”

“Just before coming back to Seoul, I was looking back on my life of some 40 years,” Choi said. “And it became very clear to me that marrying Joanne was the right thing to do. So there we were, coming back to where it all started.”

Lee came back to Korea on a trip during her doctoral studies. She decided to stay longer and took on a job at the Australian Embassy. From there, she took on many roles in and out of Seoul: she was the public diplomacy officer at the embassy, counsellor at the Australian Department of Industry, Innovation and Science, and first secretary of the Australian Trade and Investment Commission.

“I was always traveling to Beijing, Shanghai and Japan for work and leading projects involving some 100 companies,” Lee said. “The work was not easy and I relied on James more over time. He is my best friend. I can tell him anything that’s in my heart.”

Lee had to take temporary leave from the Australian Trade and Investment Commission to follow her husband to Korea. But she is not working any less, and often attends official meetings with Choi, sharing her expertise on the business and financial markets of Asia.

“Joanne has experience dealing with trade issues in Sydney and she has worked a lot on Asia affairs,” Choi said. “Her knowledge on the business and financial market of Korea is not less than that of an ambassador to the country.”

The two host quite a few meetings and gatherings at home, too. In November, they will be hosting an in-house concert at the residence.

“The embassy doesn’t have a cultural center, and it’s not easy to host events at the embassy, so home is where we will be hosting cultural events periodically,” Lee said.

Lee buys flowers from the Namdaemun market for these occasions, and decorates the house to her tastes. She has also invited a group of students from Kyonggi Elementary School in western Seoul, where she is an alumni.

“Mentoring the students is something in my work that I find very meaningful,” Choi said. “The elementary school students ask about the Terminal High Altitude Area Defense [Thaad] system, or about the Korea-Australia free trade agreement, and they’re not asking just to ask, they know what they’re asking about, and that’s what’s amazing about these sessions.”

He adds, “Meeting them, I saw Korea’s future is very bright.”

“I was invited to speak to some university students under the topic, ‘Hopes and dreams,’” he said. “And there was one question that a student asked, that quite stuck with me. He asked, ‘I’ve been told to study like a machine all my life, and now I’m asked to be creative. What should I do?’

“I said, there is really no answer to that. All you can do is find out who you are and what you like to do, and to explore those areas,” Choi said.

The top envoy said it was through such an approach that he himself got interested in the foreign service.

“I learned about leadership and teamwork through playing soccer in school, and I got interested in foreign service after coming across books on history and philosophy, and wondering what made some countries advance while others fell behind,” Choi said.

And sports are still a big part of his life. Choi runs 9 kilometers (5.5 miles) every morning on the weekdays, from Seongbuk-dong to Mt. Bugak. On weekends, he runs along the Han River, and when it rains, he cycles indoors.

He is currently training for the 2017 Seoul JoongAng Marathon on Nov. 5, hosted by the JoongAng Ilbo, JTBC, Ilgan Sports and the Korea Association of Athletics Federations. It is Choi’s seventh full marathon. He has also run the New York, Boston and Quebec marathons.

“No matter what city I’m staying at, I intend to run its significant marathons,” he said. “They are a gateway into what the city and its people are made of.”