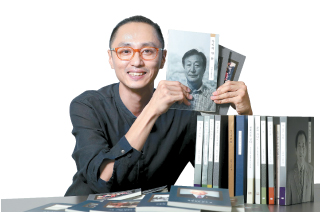 Park Beom-june, chief editor for GoomTle, with a biography of his father in his hand during an interview at an office in Seoul on Tuesday. [SHIN IN-SEOP]

Park Beom-june’s interest in the lives of ordinary Koreans, whose biographies he publishes as chief editor for the book publisher GoomTle, began with his father, whose childhood story changed the way Park leads his life.

“Every life is worth recording,” says Park. “Recording a person’s life means looking over the meaning of his or her life and eventually inheriting their wisdom and lessons.”

To write a biography, a professional writer sits with the subject and interviews him or her. The writer then fits the interview into a first person narrative. Park says publishing these “memorial books” helps subjects gain pride about their lives, and creates opportunities for different generations to communicate. It also creates more jobs for writers. The publisher is currently waiting to be officially categorized as a social enterprise.

Park started the publishing company out of personal interest. After graduating from Seoul National University, he worked in the information technology sector before resigning to go live in the countryside. He moved around to Muju, North Jeolla, and Gwangyang, South Jeolla, before opening a small library on Jeju, which is currently the home of his publishing company.

While some looked at him with envy, Park’s father was disapproving.

“Whenever my father and I start discussions about the present and the future, we got into arguments,” says Park. “We have different views and different values. But one day, I had an opportunity to hear about his childhood and it was the first time that I was able to listen to him comfortably.”

To Park, his father’s life was like a scene from an old movie. His father experienced social discrimination, the horrors of war and lived as a poor student. After listening to his father, Park decided to make a book about his stories. This was the start of his publishing company.

So far, GoomTle has published about 60 biographies, each of them about 200 pages long. The books consist of stories, introductions by family members and photos. While Park charges about 2.5 million won ($2,208) per book, they also made biographies of two firefighters who died in the line of duty - for free.

While GoomTle and Park mostly cover stories in Korea, they are looking to expand their business overseas to listen and record the memories of Korean expatriates across the globe.

“Each interview lasts about four hours,” he says, “and each time, the people we talk to seem very happy. Sometimes they get very emotional, at which point, our writers also often cry. These people find the meaning of their lives that they had forgotten.”