After missile test, Moon says dialogue with Pyongyang is ‘impossible’

After missile test, Moon says dialogue with Pyongyang is ‘impossible’ 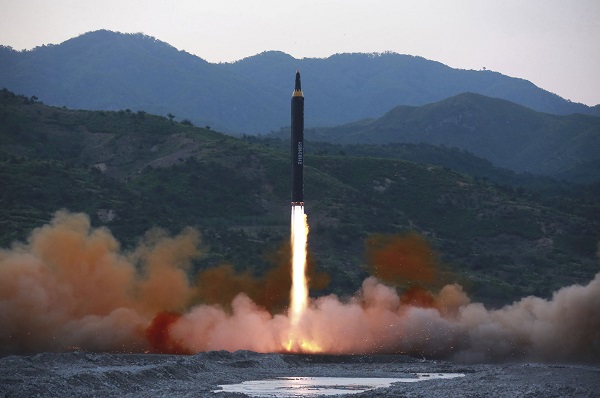 In this May 14, 2017, file photo distributed by the North Korean government shows the "Hwasong-12," a new type of ballistic missile at an undisclosed location in North Korea. North Korea launched an intermediate-range missile that flew over Japan in its longest-ever flight on Friday, Sept. 15, 2017, showing that leader Kim Jong Un is defiantly pushing to bolster his weapons programs despite U.S.-led international pressure. [AP/YONHAP]

Stung by the Kim Jong-un regime’s firing of another ballistic missile over Japan just hours after his offer of humanitarian aid, President Moon Jae-in declared Friday that dialogue with North Korea is impossible – and warned that the South has the power to destroy it beyond recovery.

North Korea fired an intermediate-range ballistic missile around 6:57 a.m. on Friday from the Sunan International Airport north of Pyongyang, the Joint Chiefs of Staff said. The missile flew over Japan and landed in the northern Pacific, reaching a peak altitude of 770 kilometers (478 miles) before landing about 3,700 kilometers away. It was the North’s 14th missile test this year.

Moon held a National Security Council meeting at 8 a.m. and condemned the North’s latest provocation. “Under this circumstance, talks are impossible,” Moon said. “To force the North to come onto the path of dialogue, the international community’s sanctions and pressures will become far more suffocating.”

Moon warned the North that it will never be able to get back on its feet if it attacks the South. “We have the power to destroy the North beyond recovery if it provokes the South and our allies,” he said, promising that the government will defend the country with its own military power as well as combined defense capabilities with the United States.

He said the military must bolster its capability for immediate retaliation and removal of threats in case of armed provocations from Pyongyang. He asked the administration to take follow-up measures as soon as possible to lift limits on payloads allowed on South Korean missiles based on a recent agreement with U.S. President Donald Trump. The arrangement was made earlier this month in response to the North’s sixth and most powerful nuclear test on Sept. 3.

He also ordered the Foreign Ministry to make the best diplomatic efforts to implement UN Security Council resolutions. The government was also ordered to prepare for new types of North Korean threats such as electromagnetic pulse weapons and biochemical threats.
At Moon’s order, the South Korean military fired two Hyunmoo-2 missiles into the East Sea in a show of force – with mixed results.

It was the first time that a Hyunmoo-2 failed since its operational deployment. The missiles are one of the core capabilities of the South Korean Kill Chain preemptive strike system.

The drill was carried out swiftly. After indicators of a North Korean missile firing were described to Moon on Thursday, he gave permission in advance for the firing of the Hyunmoo-2 missiles. “Because of the advance permission, we fired the Hyunmoo-2 at 7:03 a.m., six minutes after the North fired the missile,” a senior Blue House official said. “Although Moon gave permission in advance, we confirmed with him one more time.”

The missile launch was an obvious insult to Moon, taking place only hours after the South Korean government announced a possible plan to offer a substantial aid package to the North via United Nations humanitarian agencies. According to the Ministry of Unification on Thursday, the government was considering an $8 million aid package to help young children and pregnant women in the North through the United Nations Children’s Fund, also known as Unicef, and the World Food Program. The final decision was to be made next week.

It was clear that the Moon administration’s olive branch – and even the most recent UN sanctions – did nothing to curb the North’s escalating provocations. The missile launch took place only three days after the United Nations Security Council adopted a new sanctions resolution.

Analysts said the North appeared to be showing off its ability to strike Guam with Friday’s launch. The North unveiled a plan last month to fire missiles around Guam, announcing that Hwasong-12 missiles will fly 3,356 kilometers to Guam for 1,065 seconds and fall into waters 30 to 40 kilometers off the U.S.-controlled island.

“For a missile to fly 3,700 kilometers, its peak altitude should be higher than 1,000 kilometers, but the North’s missile had 770 kilometers of peak altitude, demonstrating the strong engine power,” said Professor Kim Jin-moo of the Graduate School of International Studies at Sookmyung Women's University. “The North appeared to have reduced the range intentionally for the last month’s launch and is demonstrating its capability depending on the U.S. reactions.”