Koreans say they are “tired of being surprised” by North Korea

Koreans say they are “tired of being surprised” by North Korea 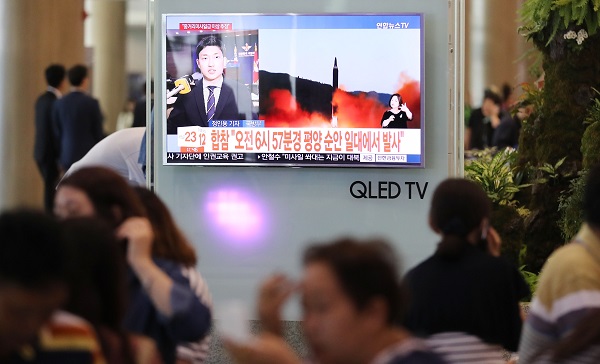 After North Korea fired another missile over Japan on Friday, some Koreans told JoongAng Ilbo they are experiencing fright fatigue.

“I saw the news this morning, and thought, there it goes again,” said Shin Sung-wook, a 36-year-old office worker. “It looks to me like the North is using these missiles to get what it wants from the other countries. The North thinks that the United States can’t do much in the region because of China and is using that to its advantage.”

“I am tired of being surprised,” said a 31-year-old surnamed Ahn. “The North’s provocations have happened so many times now, many South Koreans see it as part of their lives, which in some ways is more worrying than the tests themselves.”

He added, “What happens next is so obvious, isn’t it? The North fires the missile, then the South hosts a National Security Council meeting, then we publicly condemn the North, then there are calls for dialogue and the Korea-passing by superpowers in the region – the cycle never seems to end.”

Under the repeated missile launches by the North, some in the South are vocally criticizing any type of assistance to the North.

The Moon Jae-in administration announced on Thursday that it will provide humanitarian support amounting to some $8 million to the North.
“At the Inter-Korean Exchange and Cooperation Promotion Council’s meeting on Sept. 21, we will discuss aid to North Korea, as requested by the United Nations Children’s Fund and World Food Programme,” said the Ministry of Unification deputy spokesperson Lee Yoo-jin in a press briefing on Friday.

“I used to think that humanitarian assistance should be treated as a separate matter from the military provocations from the North,” said Jeon Chang-hoon, a 28-year-old office worker. “But now I do wonder if it’s right to supply the North with humanitarian aid and assistance. To be honest, I am scared these days that a war may break out here.”

“Of all the times, I think this may be the worst,” said a 51-year-old surnamed Park. “This is not the time to give North Korea any money.”
“I think the North keeps up the provocations because the Moon administration is not responding strongly enough,” said a 41-year-old surnamed Lee. “I support Moon, and his policies are rational, but not this one on the North.”