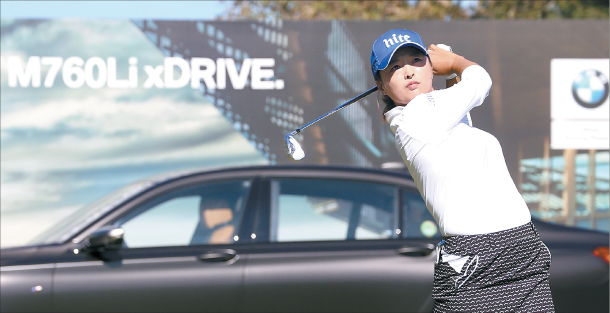 Ko Jin-young follows her shot during the final round of the BMW Ladies Championship 2017 at Sky 72 Sky & Resort in Incheon on Sunday. [YONHAP]

Ko Jin-young successfully defended her title at the BMW Ladies Championship 2017 at Sky 72 Golf & Resort in Incheon on Sunday.

Ko overcame a one-shot deficit over Lee Seung-hyun, the leader after the third round, by shooting three under par, 68, in the final round. At the tenth, she dropped two shots behind Lee after her three-putt bogey on the par-4 11th. But with her back-to-back birdies on the 14th and 15th, Ko once again went neck-and-neck with Lee.

Then, on the 15th, while Lee was tied for the lead with Ko, Lee lost her lead by hitting her tee shot into the fairway bunker. And by topping her shot from the bunker, Lee ended up making a double bogey and lost her chance for a victory, as the double bogey caused Lee to drop to ten under par.

Ko successfully finished her round by making par to secure her victory, without forcing a playoff.

“I have been hitting the ball really well since the Hanwha Classic and the KLPGA Championship so I always thought that I’ll win again,” Ko said at a press conference after the win.

Throughout the 2016 season, while Park Sung-hyun dominated the KLPGA Tour, winning six tournaments, Ko was considered the biggest competition, as she won a total of three tournaments. Winning three tournaments was good enough for Ko to be named the 2016 KLPGA Player of the Year and when Park announced her decision to play on the LPGA Tour, Ko’s name was often brought up as the player to beat in the KLPGA this season.

Prior to the start of the tournament, Ko showed her determination to defend her title this week, choosing to play in the BMW Ladies Championship rather than the Evian Championship, the last major tournament on the LPGA Tour.

“There was not even one percent of concern in which tournament to play in,” Ko said. “This was a tournament that I wanted to win again so I decided to play this weekend rather than the Evian Championship without hesitation.”

With that, Ko won a purse of 300 million won ($264,600), and jumped up three spots on the 2017 KLPGA Tour money list. The BMW Ladies Championship has the second-highest winning purse on the tour, after the Hanwha Classic. Since there are still two major tournaments scheduled for this season, Ko may be able to win the Player of the Year award for a second season.

Lee, the leader after the third round, shot an even par on the final day to finish third, while Lee Jeong-eun, the current leader in the KLPGA Tour’s Player of the Year rankings, finished tied for fifth at eight under par. Seong Eun-jeong, an amateur who held the lead after the second round, finished tied for 37th, finishing the tournament at one under par, along with Jang Ha-na, a returnee from the LPGA Tour.