The technical director of Korean football on Friday reaffirmed his stance that the men’s national team for the 2018 FIFA World Cup will be led by current boss Shin Tae-yong, rejecting speculation that former head coach Guus Hiddink might return to his old job. 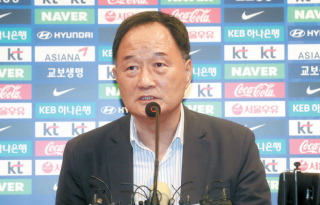 Kim Ho-gon, chief of the Korea Football Association’s technical committee, speaks during a press conference at the National Football Center in Paju in July. [YONHAP]

“Shin risked his football career in a difficult situation, but led Korea to qualify for the World Cup finals,” Kim said. “My faith in him hasn’t changed.”

Kim’s comments came a day after Hiddink, who led Korea to the semifinals at the 2002 World Cup, told reporters in Amsterdam that he is willing to help the national team in any way if the KFA wants. The 70-year-old Dutchman added he is inclined to take an advisory role, but didn’t completely rule out the possibility of taking a coaching job.

Although Kim stressed that there will be no coaching change, the KFA welcomes Hiddink’s support.

“In order to have a successful World Cup in Russia next year, we’re looking for every possible way to help the national team,” he said. “We are willing to take any help from experienced and talented experts like Hiddink.”

The Korean football community was rattled last week after local media reported that Hiddink was eyeing to return to his past job, citing Roh Je-ho, secretary-general of the non-profit Guus Hiddink Foundation in Seoul.

The report came out only hours after Korea clinched a spot in the 2018 World Cup with Shin at the helm in Uzbekistan on Sept. 5. Shin only took over the reins two months ago following Uli Stielike’s ouster and coached the final two matches in the last Asian qualifying round.

Shin is signed through the 2018 World Cup, but fans here are concerned about Korea at the World Cup since the Taeguk Warriors posted scoreless draws in their last two matches with uninspiring performance.

While Korean fans’ voice to bring Hiddink back is rising - with some even posting their request on the official website of the presidential office Cheong Wa Dae - the KFA and Kim came under fire lately after suspicions arose that they ignored Hiddink’s offer in June.

The former Chelsea and Real Madrid manager said in his interview that he delivered his intention to the KFA three months ago through an unofficial route - which turned out to be Roh - before Shin was hired as the new head coach. The KFA and Kim previously said they haven’t heard anything from Hiddink in their process of finding a new national team boss.’

Kim, however, revealed on Friday that he did receive Roh’s message regarding Hiddink’s return. Kim said he was sorry for causing confusion, but he had to downplay Roh’s message because it was sent on the mobile chat app KakaoTalk.

“I never thought that [KakaoTalk message] was an official proposal for the coaching job, so I didn’t pay attention to it,” he said. “I still think making a job proposal via mobile messenger isn’t a proper way.”

Kim, former Korea coach at the 2000 Olympics, said he first received Roh’s message on June 22, seven days before he was named the technical committee chief.

After he became the technical director, Kim added not only him, but other technical committee members also agreed on finding a local coach because there was only a short period of time to prepare for the remaining World Cup qualifiers. He also said the technical committee decided to allow the new coach to guide Korea through the 2018 World Cup, if he leads the national team to qualify for the top FIFA tournament.

Roh’s message showed that if Korea qualify for the quadrennial event, the KFA should consider hiring a coach only for the World Cup finals and Hiddink is interested in the job.

Kim said Roh texted him twice after he became the technical director, but he didn’t reply back. The 66-year-old said he finally spoke with Roh on Sept. 6, a day after Korea secured a World Cup spot, after the latter made a phone call. Kim then told Roh that mentioning Hiddink in the current situation doesn’t help the national team as Korea qualified for the World Cup with Shin at the helm.