China’s investment in Korea plunges by 44%

China’s investment in Korea plunges by 44% 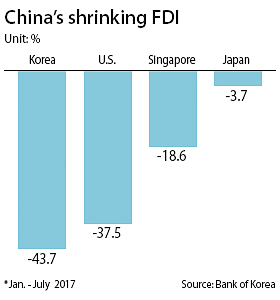 Last week Lotte started to take steps to pull out of China, following a similar move from its rival Emart earlier this year, as Korean retailers have been suffering heavily from China’s retaliation against the deployment of a U.S.-led antimissile system in South Korea.

But it is not only Korean businesses in China that have been facing hardship.

It turns out China has been cutting back heavily on its foreign direct investments in Seoul.

According to a report by the Bank of Korea on Sunday, the foreign direct investment from China has nosedived to $1.75 billion in the first seven months of this year. This is a 43.7 percent drop compared to the $3.11 billion investment made during the same period a year ago.

The tensions between the two countries have heightened since the Park Geun-hye administration agreed to deploy the U.S.-led Terminal High Altitude Area Defense System (Thaad) antimissile system in Seongju, North Gyeongsang, on a golf course that was previously owned by Korean retail giant Lotte.

The BOK report said that Korea wasn’t the only victim of China’s cutback on FDI, which overall has declined 6.5 percent in the first seven months of this year compared to a year ago.

The United States was another country that saw a significant cutback on investment from China. It lost 37.5 percent compared to a year ago, a sharp turnaround from the 47.9 percent increase through 2016.

The BOK in its report said the downsizing of China’s investments overseas was largely a result of a change in policy.

“The Chinese government has started to pursue a policy that selects and focuses [investments] on advanced manufacturing and the service industry while limiting its foreign direct investment in areas such as energy and environmental pollution that have been made excessively since the global financial crisis [of 2008],” the BOK report said.

It added that the Chinese government has been limiting Chinese companies’ foreign investments in the hope of limiting excessive outflow of capital and the weakening of the Chinese currency.

In fact in 2016 China’s foreign reserves shrunk $319.9 billion while the yuan fell 6.5 percent against the U.S. greenback.

However, while China’s FDI has fallen across the board, Korea’s was particularly noticeable.

The report came at a time when the Blue House last week dismissed the idea of petitioning the World Trade Organization over China’s economic retaliation against Thaad, citing the need for Beijing’s cooperation amid North Korea’s ongoing missile and nuclear tests.

“Now is a very important juncture for maintaining cooperation with China due to North Korea’s nuclear and missile provocations,” Park Soo-hyun, the Blue House spokesman said on Thursday.