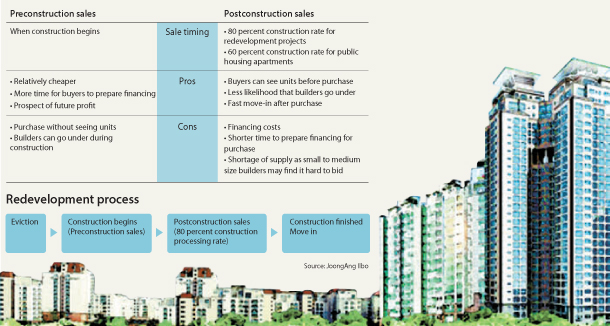 With the Moon Jae-in government’s plan to impose a price ceiling on apartment sales next month, people living in posh districts in southern Seoul are planning to avoid preconstruction sales when their apartment complexes are redeveloped.

They think sales a few years later will bring in more money.

As part of its attempt to cool off the real estate market and rein in speculation, the government will put in place a price ceiling on apartment sales.

Starting next month, the government will calculate the appropriate price tag for an apartment based on land value and construction-related expenses. The price cap will be applied in areas with hot real estate markets: where the rise in prices is double the inflation rate or more over the past three months.

In response, an increasing number of people in areas south of the Han River, known for high real estate prices, believe post-construction sales will bring them more money for redeveloped apartments.

In Korea, apartments can be purchased before they are built in a so-called preconstruction sale.

This is a big change in the real estate market.

If a builder chooses post-construction sales, it has to finance the construction. That may squeeze small to medium size companies with relatively meager financing capacity from bidding on projects.

Buyers will have to adjust too. Instead of spreading out their payments, they will have to pay the full amount of an apartment at one time.

Experts say such a trend is unlikely to spread to the northern part of Seoul or other areas outside the city of 10 million.

“There is consensus that the real estate value of Gangnam is going to rise and it’s mainly major construction companies [with sound financial positions] that take on redevelopment projects in those areas. So they have no serious issue with selling apartments on a post-construction basis,” said Shim Gyo-Eon, professor of real estate studies at Kunkook University.