Voice phishing on the rise as holiday season approaches

Voice phishing on the rise as holiday season approaches 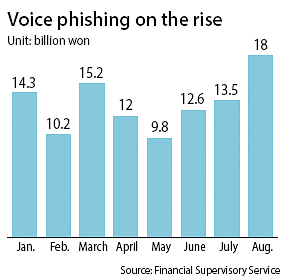 A 43 year-old, whose name was withheld, received a call last month from what appeared to be a savings bank and was told that they were eligible to get a loan of up to 45 million won ($39,700) with a low interest rate.

The alleged savings banks employee explained that in order to receive the loan the person had to first pay 15 percent of the total as commission. The so-called employee said that once the 15 percent payment was confirmed the savings bank would issue the loan and return the commission to the client’s bank account. After the 13.5 million won commission was transferred the supposed employee disappeared. It was a voice phishing scam.

The Korea Communications Commission and the Financial Supervisory Service said Sunday that starting today it will be issuing text messages warning about voice phishing through the country’s three major telecommunication companies - SK Telecom, KT and LG U+ - since recently such fraudulent acts have been on the rise with the Chuseok holidays nearing.

Chuseok, along with the Lunar New Year, is a time when people often need quick cash, whether it is to give the traditional holiday bonuses to employees, travel money to return home or money to hand out to young children.

According to the government, voice phishing has evolved in recent years and has reached the level where it is difficult to differentiate between fraudsters and real financial companies’ employees.

As a result, the damages resulting from voice phishing have been rising. In the first eight months of this year damages from fake loan calls amounted to 105.4 billion won. That’s a near 40 percent increase compared to the same period last year, which amounted to 76 billion won.

The communication commission and the FSS said if the person on the other end of the phone asks for any kinds of commission payment, whether it’s a deposit on the loan or a payment needed to get approval for a loan, it is certainly voice phishing. If they say they are going to raise your credit rating using illicit means or convert existing loans to a loan with lower interest rates and ask you to make payment to a certain bank account, it is definitely voice phishing.

Schemes that claim you need to borrow a loan with high interest in order to get low interest rates are also fraudulent.

In June a 59-year-old, whose name was not disclosed, fell victim to a scam when he received a call from someone claiming to be an employee of a government-owned corporation. The person on the other end said the 59 year-old was eligible for an 80 million won loan with low interest thanks to the newly launched Moon Jae-in administration’s welfare policies.