In mobile gaming, a clash of giants is astir

In mobile gaming, a clash of giants is astir 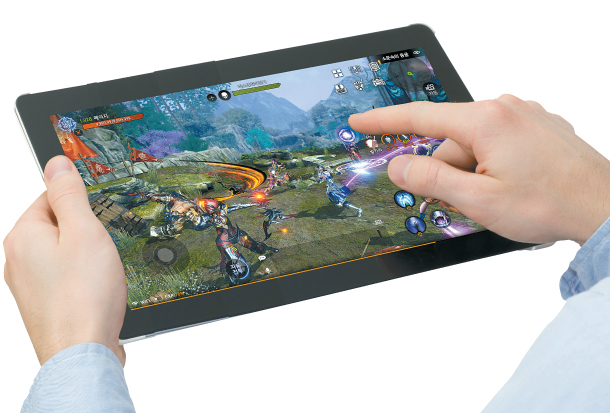 With the rising popularity of mobile massively multiplayer online role-playing games, or MMORPGs, in Korea, game publishers are scrambling to expand their grip in the growing market.

In particular, three of the country’s top developers — Netmarble Games, NCSOFT and Nexon — are slated to introduce their latest mobile MMORPGs before the year’s end, signaling a fierce battle as they try to take the lead in the market.

While mobile MMORPGs have existed before 2016, it wasn’t until the launch of Lineage 2: Revolution by Netmarble that year when the genre finally experienced a boom among local gamers. The game is developed based on the intellectual property of Lineage by NCSOFT, a PC-based MMORPG that came out in the late 1990s.

It took less than a month for Revolution to rake in more than 200 billion won ($176.4 million) revenue after its release in December. The success of the game also drove up Netmarble’s value when the company went public in May. Netmarble’s initial public offering was Korea’s second-largest IPO in history, raising about 2.6 trillion won ($2.3 billion) on the first trading day on May 12.

Although Netmarble first raised the bar for mobile MMORPGs with Revolution, it was Nexon, a developer of popular games such as Crazy Arcade and Maplestory, that started off the race in the second half.

Left: AxE, released on Sept. 14, is Nexon’s latest attempt to expand its share in the MMORPG market. Right: Netmarble, developer of the popular MMORPG Lineage 2: Revolution, is set to release another MMORPG, Tera M, in November. [NEXON, NETMARBLE]

Nexon released AxE (Alliance x Empire) on Thursday, a MMORPG that depicts a war between an Alliance of nations and an Empire. Players choose the side they would like to represent and pick a character from three options including warriors and mages. Nexon adopted a narrative in the game that makes it inevitable for gamers to clash against players from an opposition party, which the game maker calls Realm vs. Realm battle.

Lee Seung-hoon, an analyst at BNK Securities, said Nexon is essentially attempting to bring a large-scale battle to mobile, which before AxE was a feature unique to PC-based games. By Friday, it had become the top mobile app on Apple’s App Store and second in the Google Play Store in terms of sales.

The company is set to release two more mobile MMORPGs later this year, Durango: Wild Lands and one based on the intellectual property of Final Fantasy. Durango is the first game by Nexon that actively utilizes artificial intelligence technology. The main background island, for instance, is not placed there by a human developer but by an artificially intelligent operator of the game, which creates the landscape spontaneously as a player explores the island, a spokesperson from Nexon said.

Although the game maker is yet to make a significant impact in the local mobile game market, the series of MMORPGs may change the dynamics.

“Full-fledged entry to the MMORPG segment will work to improve mobile business sales,” said Andy Kim, an analyst at Korea Investment & Securities. “Nexon should become a contender against top-ranked companies by releasing six MMORPGs in 2017.”

NCSOFT has already thrown its hat into the ring in June with Lineage M, a mobile replica of Lineage, one of the most popular games in Korea that continues to wield staying power despite being nearly 20 years old. The developer on Wednesday updated content in the game and plans to add more content from the PC game to the mobile version.

The next bullet in the barrel for NCSOFT is the mobile version of Blade & Soul, which was originally a PC-based MMORPG released in 2012. The game is especially popular among players overseas.

NCSOFT’s accumulated sales through the PC-based Blade & Soul is 811.3 billion won since its launch, according to company data. In 2016, more than 50 percent of the profit for Blade & Soul came from overseas markets like North America, Europe and China. In China alone, NCSOFT reportedly earns about 30 billion won a year through Blade & Soul.

“Despite the heated competition, NCSOFT will further cement its stance in the domestic MMORPG market,” said Kim of Korea Investment & Securities, citing numerous popular PC-based games that it has developed in the past, including Blade & Soul and Aion, which the company is set to turn mobile this year and next.

Although bombarded by growing competition, the current market leader, Netmarble, is not sitting on its laurels. It’s set to roll out Tera M, a mobile version of Tera, which has some 25 million global users, in November.

“Tera M will be the biggest game that we are launching during the second half,” Baek Young-hoon, vice president at Netmarble, said during a press conference earlier this month. Baek added that the contents of the mobile Tera will far surpass those of the original.

The company is also counting on Revolution’s continued success outside of Korea. Netmarble had taken the game abroad to tackle the developing global MMORPG market. In the second and third quarters of this year, Netmarble brought Revolution to Southeast Asia and Japan, where it became the top-grossing app within a day of its launch. According to some estimates, Netmarble may earn about 30 billion won from overseas markets with Revolution, including around 10 billion from Southeast Asia and 18 billion from Japan. It’s slated to release the game in China by the end of this year or first quarter of next year in partnership with Chinese internet giant Tencent.

Korean gamers are expected to be the biggest beneficiaries of the clash of giants. “It’s going to be an all-out war among local game developers,” said James Seo, a semi-professional gamer. “Gamers like myself will be able to enjoy more variety of content and services because of this competition.”