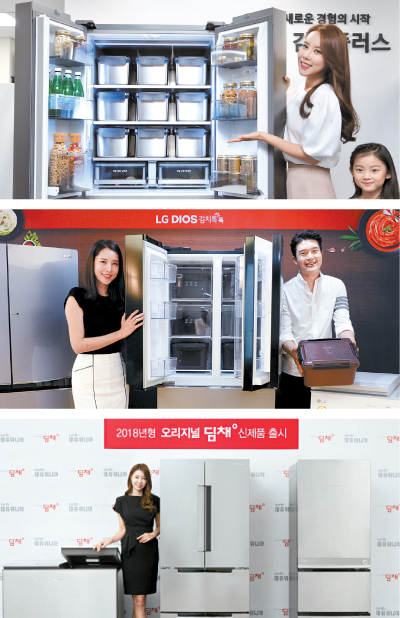 Competition for kimchi refrigerators is heating up as kimchi-making season, also known as kimjang, is fast approaching.

Although hardly ever found overseas, this particular product is a must-have for households in Korea. As the name suggests, the refrigerator is designed in a way to provide the best conditions to help kimchi’s fermentation process and prevent it from turning sour as quickly as it would in a conventional refrigerator.

Industry insiders estimate that around a million kimchi refrigerators are sold every year. Between September and November is when purchases reach a peak and around 60 percent of annual sales come from the year’s fourth quarter.

Traditionally, Korean families make large amounts of kimchi in the autumn to last for the next year. The kimchi was stored and fermented in large pots buried in the ground. This became the motivation for kimchi refrigerators which are generally more humid, cooler and have less air circulation than general refrigerators.

Apart from the original purpose as a storage facility for Korea’s favorite side dish, kimchi refrigerators are also used to preserve fresh food as they provide a more humid environment in which vegetables and fruits maintain their freshness for longer. That function is the reason the usage and sales of kimchi refrigerators continue throughout the year.

According to research from Samsung Electronics, the space allocated for kimchi inside kimchi refrigerators reduced by more than 20 percent over the last three to four years, whereas that for fruits, rice and other fresh food ingredients increased by 65 percent.

Samsung Electronics’ latest model, released last week, takes into account the changing usage of the refrigerators. Kimchi Plus is the first new product from Samsung’s “premium” line-up of kimchi refrigerators since the Zipel Asak M9000 series released in 2011.

Kimchi Plus comes with 17 storage modes that create adequate environments for kimchi and fresh food - which have different conditions for preservation. Kimchi tastes best when stored below zero degrees Celsius (32 degree Fahrenheit), whereas the best environment for bananas is room temperature. Other options include conditions tailored for wine, fresh meat and traditional fermented pastes.

Among the 17, six are modes for different kinds of kimchi. Apart from the red, spicy version made from cabbage, kimchi has many variations that differ in spiciness, main ingredient and saltiness. Users can choose modes according to how fast they want the kimchi to ferment and the saltiness of the kimchi they’re storing.

Kimchi Plus comes in two sizes of 486 and 584 liters. It is priced between 2.5 million won ($2205) and 6 million won according to the size and additional options such as patterns.

LG Electronics unveiled a much larger selection for this year’s kimchi refrigerator line-up. The LG Dios Kimchi Tok Tok comes in 49 variations according to size, varying from 128 to 836 liters (4.5 to 29.5 cubic feet), and type - whether it’s the standing model that looks like a tall, conventional refrigerator, or the cooler type which opens from the top. The models were priced between 600,000 won and 4.2 million won.

One fermentation mode provided by LG’s new model increases lactic acid bacteria in kimchi up to 12 times and maintains it longer, which prolongs the period kimchi is at its best from two to three months.

To prevent cool air coming out and warm air entering every time the user opens the refrigerator, Dios Kimchi Tok Tok has plastic covers for each section inside the fridge. The air inside the fridge is circulated every six minutes.

LG also divided sections inside the fridge so that users select a mode for each part according to its contents or even turn sections off to save electricity in case they are empty.

Energy efficiency also improved. For products with over 400-liter capacity, the monthly electricity consumption is 12 kilowatt hours, which is worth about 2,000 won per month.

Dimchae’s core technology is the “Special Dzone,” which is a space inside the refrigerator specially set for seasoning food like beef and pork. A new seasoning mode for cheonggukjang, or fermented bean paste, was added to the latest version. A slim handle was attached to the lid after consumers complained on previous models that they were too heavy to lift.

The kimchi refrigerator from Dongbu Daewoo Electronics boasts the highest energy efficiency. Its Power-saving Klasse Multipurpose Kimchi Refrigerator eats up only 8.7 kilowatt hours per month. “The electricity bill for a month using this model is only around 1,130 won,” said the company spokesman. Released in standing and cooler versions, the products are worth between 500,000 and 700,000 won.