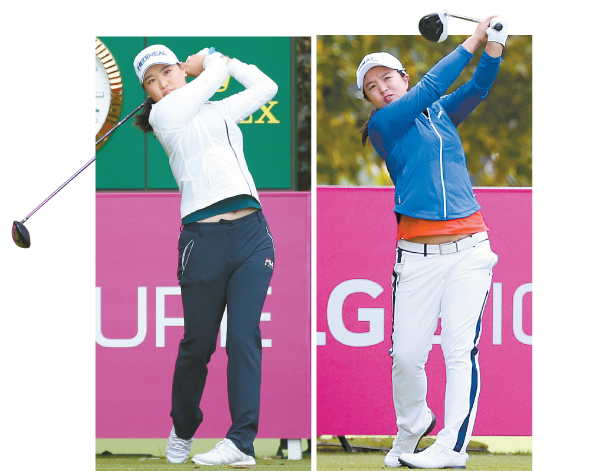 From left: Ryu So-yeon and Kim Sei-young watches their tee shot during the final round of the Evian Championship at the Evian Resort Golf Club in France on Sunday. [YONHAP]

Korean golfers failed to win the Evian Championship over the weekend, but it wasn’t all a bust, as Ryu So-yeon won the Annika Major Award upon completion of the tournament at the Evian Resort Golf Club in France on Sunday.

For Ryu, the weekend was simply unlucky. The first round was canceled due to bad weather, and while most of the golfers were happy to have the day wiped from their record, it was the worst thing that could have possibly happened to Ryu as she was leading the field before the cancellation. Over the next two days, Ryu barely made the cut, shooting two over par in both rounds.

“Honestly, cancellation wasn’t the best decision for me,” Ryu said. “I tried to calm myself down by telling myself to try my best in any situation given to me, but when I played poorly in the first round, I kept on going back to the situation on Thursday.”

In the final round, Ryu shot an even par to finish tied for 40th. It wasn’t her best record this season, but because the winner of the Evian title, Anna Nordqvist of Sweden, did not win any other majors this season, the Annika Major Award, which honors the best performance in major tournaments this season, went to Ryu. She is the second Korean golfer after Park In-bee to win the award, earning a total of 78 points in majors.

“I’m so honored to have this award, especially with it named after one of the greatest women golfers in our golf history,” Ryu told the Golf Channel. “Major Award is always a tough challenge, and I feel like if I play well at the major tournaments, my game is just top of the world.”

“I just played aggressively without thinking about the victory or looking at the scoreboard,” Kim said.

Following the Ricoh Women’s British Open last month, Kim struggled in two tournaments, finishing tied for 22nd and tied for 42nd before the Evian Championship. With the last major of the season out of the way, Kim is considering the ups and downs as a learning experience.

“I think this year is for me to take a break,” Kim said. “Last year, I was focused too heavily on the Rio Olympics. I was able to check on my game from playing in tournaments this season. It was a year for me to prepare for my next three years. I have no regrets, and it was a good experience.”

Kim, now in her third year on the LPGA Tour, has won a total of six titles, including the Citibanamex Lorena Ochoa Match Play in May. Now, Kim will be taking three weeks off and resume her season with the LPGA KEB Hana Bank Championship, which starts on Oct. 12 in Incheon.

Nordqvist of Sweden won the Evian Championship after defeating Brittany Altomare of the United States in the first playoff hole with a bogey. This was Nordqvist’s second LPGA major title since her victory at the McDonald’s LPGA Championship in 2009.