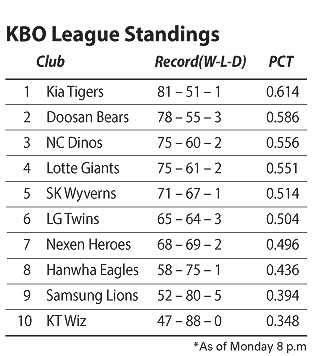 The Doosan Bears may have their work cut out to be in with a chance of winning the regular season again this year, but their game against the Samsung Lions on Sunday has allowed them to set quite the record. When the Bears beat the Lions 21-8 they set a new record for the highest number of runs the team has ever scored in a single game, including back in their OB Bears days.

Competition is heating up between the third and fourth ranked teams as the season approaches its end. Since the Giants defeated the SK Wyverns 9-5 and the Dinos lost 14-6 to the Nexen Heroes, the Giants are now only 0.5 games away from moving up a spot in the KBO standing. For the Giants, the victory not only allowed them to get close to the Dinos, but it has also allowed them to tie their internal record for the most wins in a single season.

With only six games remaining for the Giants, one more win will guarantee their spot in the postseason for the first time in five years. It is an impressive step for the Giants, as they started August in seventh. Within only a little more than a month the Giants have moved up three spots by winning 19 of 26 games. Even in September they are continuing to get better, as their record is at nine wins and four losses.

On the other side, the Dinos have been heading downhill since the all-star break. In 27 games in August, the Dinos recorded 12 wins and 15 losses, which allowed the Bears to take the second spot in the KBO. Even in September, the Dinos recorded six wins, seven losses and one tie. 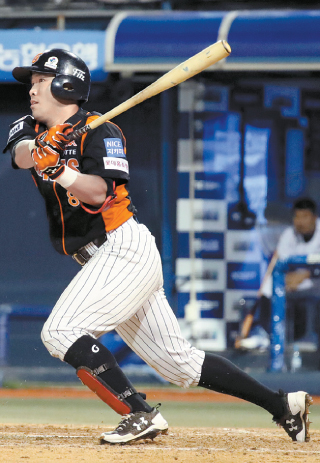 There is not a single doubt that Jeon Jun-woo is having the best season of his career, as he has the highest batting average and number of home runs this season since his KBO debut.

Jeon has spearheaded the Giants’ batting lineup this year. In a total of 104 games played, the 31-year old outfielder has a 0.320 batting average with 18 home runs and 64 RBIs. Looking further into the statistics, he has a 0.510 slugging average and a 0.368 on base percentage. Jeon has shown consistency throughout the season, having had at least a hit in 17 consecutive games in both the first and the second half of the season.

Jeon, who got drafted by the Giants in the second round of the 2008 KBO rookie draft, returned to the team in September after serving his time in the military.

Having only played in 25 games in the 2016 season, Jeon performed below expectations, with a batting average of 0.253. That said, he decided to join the Giants’ end of the year camp and made changes in the balance and power of his batting. His efforts continued until the spring training exhibition games and it showed, as hit bat has continued to explode since the start of the season.

Jeon had to take a break after a rib injury received while training before a game against the SK Wyverns on April 9. Luckily, he didn’t have any aftereffects from the injury and successfully returned on May 23 against the Wyverns.

With only five games remaining until the end of the regular season, the Giants will play against the Doosan Bears at Sajik Baseball Stadium today.