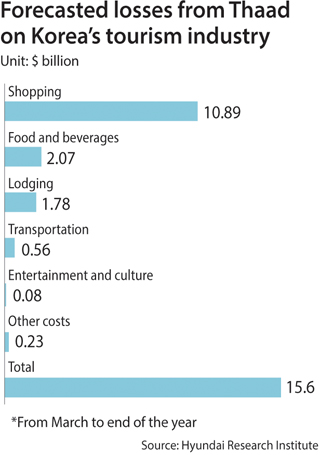 A recent decision by the presidential office to drop a World Trade Organization petition against China for its trade retaliation on Korea over a missile defense system will likely further harm Korean companies, international trade experts warned.

Sim Sang-ryul, a professor at Kwangwoon University in Seoul, said the Blue House’s decision has put the government in a position where it can no longer protest China’s actions and has limited Korea’s options by reducing its negotiating power against China.

Until last week, Korea’s Ministry of Trade, Industry and Energy had been preparing to lodge a complaint with the WTO on Oct. 6, arguing that China had violated international trade regulations by targeting Korean imports and banning Chinese travel agencies from booking group tours to Korea.

As recently as last Wednesday, a ministry task force dedicated to reviewing trade with China said it was actively considering bringing the case to the WTO, citing a rule that there should be no discrimination against exports and imports among WTO member countries.

Minister Paik Un-gyu told reporters that the Korean government, if necessary, would not shy away from a petition, adding that Korean companies have suffered immensely. Several law firms have been consulting the ministry since March to build up its case.

But then on Thursday, the president’s office changed tack, citing the need for stronger cooperation with China against North Korea.

“We hope to address difficult issues between South Korea and China by further strengthening strategic communication and cooperation,” Park Soo-hyun, the Blue House’s spokesman, said on Thursday. “Now is a very important juncture for maintaining cooperation with China due to North Korea’s nuclear and missile provocations.”

The Blue House did not formally pass down a reversal order to the ministry, but Park’s statement was a strong hint at the administration’s position.

Some trade experts have questioned whether Korea can win its case in the WTO as it needs to prove there was discrimination against Korean goods and services.

China itself has never openly admitted to retaliating against Korea over Thaad, though it has tightened the lid on Korean companies operating in China by making them targets of stronger-than-usual inspections. The Korean government will be hard-pressed to prove these actions are retaliatory.

“It’s hard to expect [the Korean government] to win if the issue is petitioned at the WTO,” said Cheong In-kyo, a professor of international trade at Inha University in Incheon. “And it won’t be easy to change China’s fundamental policy direction. The [Korean] government has been raising the issue at the WTO services sessions without any effect.”

Professor Sim at Kwangwoon University said it was careless of the administration to expose its miscommunication with government departments and argued that the Blue House had lost a powerful negotiating card by saying it would not petition the WTO.

Even the threat of bringing the case to the WTO, he said, could pressure China. “The Blue House has broken the ambiguity strategy of the trade authorities,” Sim said.

The Korean private sector, meanwhile, has been suffering heavily from trade restrictions. According to a study by Hyundai Research Institute, the Korean tourism industry is estimated to have suffered a loss of $6.5 billion between March - when the Chinese government began banning tour groups from traveling to Korea - and July. If the situation continues through the end of the year, the losses are expected to reach up to $15.6 billion.

Most recently, Korean retailers Lotte and Emart have decided to pull out of China.

Professor Cheong at Inha University said if the government fails to come up with a consistent strategy, the damage at companies will continue to grow.

Ahn Se-young, a professor of international studies at Sogang University, said the Korean government should aggressively make the case to Beijing that its retaliation against Korean companies will eventually not benefit China.

He added that Korean companies should come up with a scheme to reduce the excessive dependency on China in the long term.

“If Korean companies pull out of China, China will also suffer from loss of jobs and investment,” Ahn said. “At the same time, we need to expand our trade markets to other countries like India and Southeast Asia.”

This, he said, will help strengthen the Korean government’s position in negotiating with China.