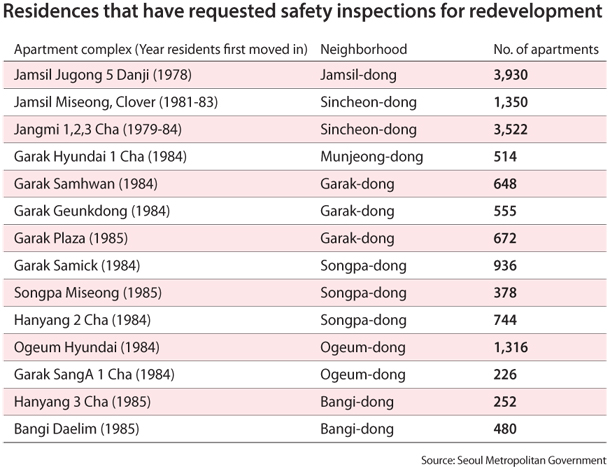 On Sept. 7, the residents of Jamsil Jugong 5 Danji, an apartment complex in Jamsil-dong, southern Seoul, won approval for redevelopment after a protracted battle with the Seoul Metropolitan Government. For nearly a decade, expectations were high for the project, especially since several other complexes in the area had gone through redevelopment in the late 2000s.

Jamsil Jugong 5 Danji was considered next, but tensions between apartment owners, who wanted to build a 50-story building, and the Seoul government, which wanted to limit building heights to 35 stories, have held back the project.

The government said it was approving the redevelopment projects because the aging buildings had become an inconvenience for residents. All three complexes were first built in 1984 and received the lowest mark on safety inspections.

Most of the apartment buildings in Songpa District are 10 stories or higher and were built between 1970s and 1980s.

Currently, 17 complexes are slated for redevelopment pending safety inspections. The district has the second-largest number of redevelopment requests after nearby Gangnam District, which has 40 apartment complexes slated for approval.

Most of the to-be-remodeled complexes in Songpa District are concentrated in the neighborhood of Munjeong-dong, where 12 are requesting redevelopment. They were built between 1984 and 1985.

The latest developments have affected apartment prices in the area. Songpa District saw the value of its homes rise 0.09 percent on Sept. 11 compared to a week earlier, higher than the 0.01 percent increase across the city.

“There’s a possibility that apartment prices could further go up as the speed of redevelopment is fast,” said Kwon Il, head of research at Budongsan Info, a real estate market research firm. “However, as it is still in the early phase and the floors are higher than other redevelopment projects in Gangnam District’s Gaepo-dong and Gangdong District’s Duncheong-dong, the projects’ profitability could fall.”