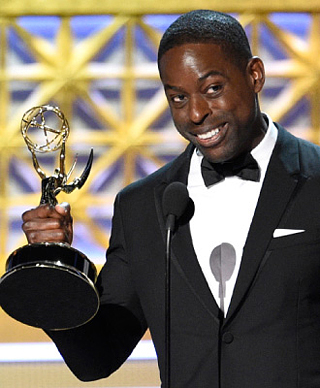 “Go home, get to work, we have a lot of things to fight for,” producer Bruce Miller said in accepting the best drama trophy for “A Handmaid’s Tale,” which also won best drama writing and directing awards and a best actress trophy for Elisabeth Moss. A beaming Margaret Atwood, the Canadian author whose 1985 novel is the show’s source, was onstage.

Sterling K. Brown, whose role in “This Is Us” earned him the top drama series actor trophy, paid tribute to the last African-American man to win in the category, Andre Braugher in 1998 for his role as a police detective in “Homicide: Life on the Street.”

“Nineteen years ago, Detective Frank Pemberton held this joint,” Brown, hoisting his Emmy and calling it his “supreme honor” to follow Braugher.

Moss captured her first Emmy and thanked her mother in a speech that was peppered with expletives, while Ann Dowd won supporting actress honors for “A Handmaid’s Tale.” Donald Glover won the best comedy actor for “Atlanta,” which he created and which carries his distinctive voice, while Julia Louis-Dreyfus was honored for a sixth time for her role as a self-absorbed politician in “Veep,” named best comedy for the third time.

“I want to thank Trump for making black people No. 1 on the most oppressed list. He’s the reason I’m probably up here,” Glover said.

Saturday Night Live” triumphed for a season of skewering Trump.

“I remember the first time we won this award,” creator Lorne Michaels said in accepting the show’s trophy for best variety sketch series. “It was after our first season in 1976. And I remember thinking ... there would never be another season as crazy, as unpredictable, as frightening, as exhausting, or as exhilarating. Turns out I was wrong.”

The trophies for best supporting comedy acting went to Kate McKinnon, who played Hillary Clinton on “SNL,” and Alec Baldwin for his Trump portrayal on the NBC show. AP