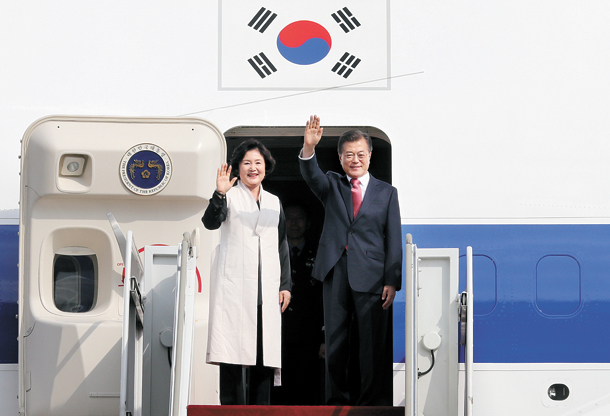 President Moon Jae-in and first lady Kim Jung-sook wave on Monday before boarding the presidential airplane to kick off a five-day trip to New York, where Moon will make his debut at the UN General Assembly. He is expected to address the North Korean nuclear issue. [YONHAP]

President Moon Jae-in on Monday kicked off a five-day trip to New York, where he will make his debut at the UN General Assembly and is expected to address the North Korean nuclear issue.

He will deliver an address at a UN General Assembly session on Thursday, and is expected to call on the international community to keep putting pressure on North Korea over its nuclear and missile programs to get the regime to return to dialogue.

The address comes on the heels of North Korea’s sixth nuclear test earlier this month, which resulted in a new UN Security Council resolution imposing a fresh set of sanctions on the Pyongyang regime.

Moon, U.S. President Donald Trump and Japanese Prime Minister Shinzo Abe will also hold a trilateral meeting on Thursday on the sidelines of the General Assembly.

The White House said Trump will hold a working luncheon with Moon and Abe and emphasized that North Korea “remains one of the world’s most urgent and dangerous security problems.”

The three leaders held their first trilateral summit on the sidelines of the Group of 20, or G-20, summit in Hamburg, Germany, in July.

This marks Moon’s second presidential trip to the United States since he took office in May, following a summit with U.S. President Donald Trump at the White House in Washington in late June.

Seoul and Washington are also discussing a summit between Moon and Trump. Moon and Trump held a phone conversation Sunday following Pyongyang’s latest intermediate-range ballistic missile launch over Japan Friday and ahead of their upcoming meeting, agreeing to bolster cooperation on North Korea.

The White House said that Trump’s message at the UN General Assembly, where he will deliver an address Tuesday, will be to promote peace and prosperity and uphold sovereignty and accountability.

Moon, accompanied by first lady Kim Jung-sook, departed on a private jet to the United States from Seoul Air Base in Seongnam, Gyeonggi, Monday afternoon.

Korean Minister of Foreign Affairs Kang Kyung-wha accompanied Moon, marking her first return to the United Nations since she departed from her post as senior adviser on policy to UN Secretary General Antonio Guterres to become Seoul’s top diplomat.

Moon will start his trip meeting with Guterres and is expected to discuss UNSC Resolution 2375, the latest package of sanctions on the North adopted last week, and the efforts needed to implement it effectively.

On Wednesday, Moon is scheduled to meet with Thomas Bach, president of the International Olympic Committee (IOC), to discuss cooperation over the upcoming PyeongChang Winter Olympics 2018.

Moon will also receive the 2017 Global Citizen Award from the U.S. think tank Atlantic Council on Tuesday for his polices “eradicating deep-rooted problems that exist in the political and economic system” and addressing the North Korean nuclear crisis.

Along with bilateral meetings with a series of world leaders, Moon is also expected to meet with Korean residents in the New York area and hold a luncheon with businessmen. He returns Friday.