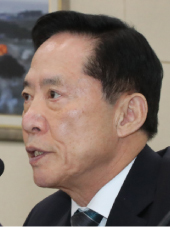 National Defense Minister Song Young-moo said Monday that the South Korean government was planning to delay an $8 million aid package to North Korea after it fired an intermediate-range ballistic missile last Friday, a day after Seoul announced the humanitarian aid.

But Song did not give a specific timeline, only saying that the government would “delay and adjust” the timing of the donation.

The Unification Ministry, which initially described the aid package to local reporters last Thursday, never mentioned when exactly Seoul would carry out the initiative. Specific details, including when and how the aid would be offered, will be decided “with consideration of North-South relations,” ministry officials had said.

Speaking to a group of lawmakers on the parliamentary National Defense Committee in regards to North Korea’s firing of a Hwasong-12 intermediate-range ballistic missile, Song reiterated President Moon Jae-in’s denial of bringing back tactical nuclear weapons to South Korea, saying it “wouldn’t be right.”

“Things are much different between now and when the United States pulled out nuclear weapons from the Korean Peninsula” in 1991, said Song. He said South Korea is currently capable of overcoming any imbalance of power between the North through its ironclad alliance with America.

Song continued that the North was very much likely to conduct more missile tests in the future, and that the Punggye-ri nuclear test site, where it conducted all six of its past nuclear experiments, was prepared to hold a seventh test at “any time.”

The latest missile test was a defiance of a recently passed United Nations Security Council resolution and a demonstration that North Korea was unfazed by it, Song said. “It also appears that the North was trying to show off its capability to besiege Guam,” he added, referring to the U.S.-controlled island in the western Pacific.

“It’s really deplorable seeing how the man goes around talking like a scholar, not a special presidential adviser,” Song said. “I met him once or twice before being sworn in, and realized he was a really free-spirited person. So I told my advisors just let him be.”