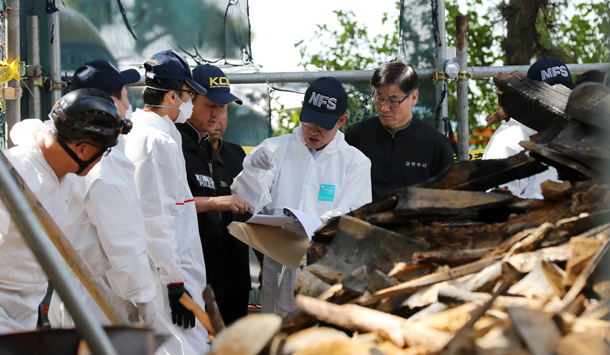 Police officers, firefighters and forensic investigators search the Seokran Pavilion in Gangneung, Gangwon, on Monday for clues as to the cause of the fire, which killed two firefighters Sunday. [YONHAP]

Fires at the Seokran Pavilion in Gangneung, Gangwon, killed two firefighters on Sunday. Authorities found paint cans on site and are investigating the cause of the fire.

The fire began around 9:45 p.m. Saturday. Firefighters were able to put it out in around 10 minutes.

But the traditional structure, used as a community center, was reported to be back on fire around 3:51 a.m. Sunday. Two firefighters, 59-year-old Lee Young-wook and 27-year-old Lee Ho-hyeon, were fighting the fire inside the pavilion when its roof collapsed and they died.

Some 20 police officers, firefighters and forensic investigators combed through the pavilion and found Monday a number of paint cans, partially burned.

Police said that a local resident managed preservation and security of the pavilion for the past few years.

“The pavilion was partially used as a warehouse of goods and tools,” he told police, “which is why the paint cans were there.”

The pavilion was built in 1956, mostly out of wood.

Police are inspecting CCTV footage from around the pavilion and black box videos of vehicles parked in the vicinity at the time of the fires.

A total of 10 firefighters worked at the Gyeongpo Fire Department, including the two that died. A team of three firefighters would take turns to fight fire in shifts.

The Gyeongpo Fire Department covers 97 square kilometers (23,969 acres), which means that firefighters could be dispatched to a distance as far as 30 minutes away by car.

“We can take up to five firefighters on the truck, but we don’t have enough firefighters so there are only three who are dispatched at a time,” said a spokesperson of Gyeongpo Fire Department.

Gangwon has 2,589 firefighters, only 58 percent of the minimum number of firefighters needed for the province, which is 4,431, according to the Framework Act on Fire-fighting Services.

In Korea, there are 44,293 firefighters - one firefighter for every 1,579 citizens. The minimum number of firefighters needed in the country is 63,547, according to the framework act.

The central government and National Fire Agency said they will increase the number of firefighters by 20,000 by 2022.

“The nation mourns for the death of firefighters Lee Young-wook and Lee Ho-hyeon,” Minister of Interior and Safety Kim Boo-kyum wrote on his Facebook page. “We will do what we can to right the wrongs [in the system].”

The National Fire Agency said 49 firefighters died on the job since 2008. An additional 47 committed suicide since 2008. Firefighters have been reported to suffer depression and high levels of stress after witnessing disasters and deaths on the job.