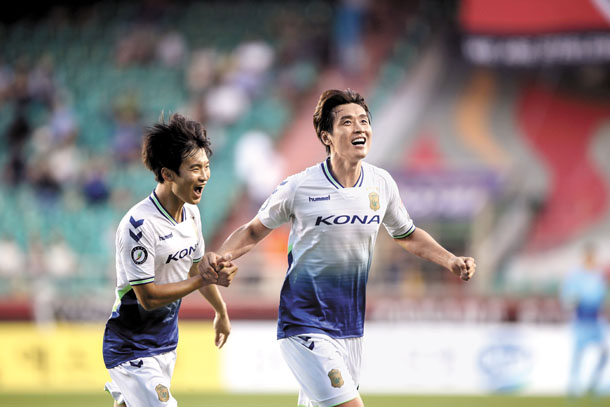 Lee Dong-gook of Jeonbuk Hyundai Motors celebrates after scoring a goal during a match against Pohang Steelers at Pohang Steel Yard on Sunday. [K LEAGUE]

Lee Dong-gook of the Jeonbuk Hyundai Motors has joined the 70-70 club, an esteemed group of footballers who have achieved 70 goals and 70 assists in their career. The 38-year-old striker is the first player from the K League to achieve the feat - and it took him 20 years to get to that day.

During Jeonbuk’s match against the Pohang Steelers at Pohang Steel Yard on Sunday, Lee made two assists, giving him 71 career assists to vault him into the 70-70 club. His career record in goals stands at 197.

Lee scored his first goal of the game just 41 seconds into the match to allow Jeonbuk to take an early lead. The team scored its second goal in the 14th minute, and during the 29th minute, Lee made another goal attempt, but the ball touched Han Kyo-won’s heel before rolling into the net, giving Hyo credit for Jeonbuk’s third goal in the game and Lee credit for assisting. Then in the 61st minute, Lee recorded another assist for Jeonbuk to extend their lead to 4-0.

With Lee’s achievements in the recent match, the K League named Lee player of the week, his second time winning the distinction this season.

Since the K League was first established in 1983, no players have achieved 70-70 in their career, though three players - Shin Tae-yong, Eninho and Mauricio Molina - have made the 60-60 club. None of them are with the K League anymore.

Among currently active K League players, Yeom Ki-hun of the Suwon Samsung Bluewings has the highest possibility of joining Lee in the 70-70 club, but judging from his record of 59 goals and 97 assists, it’s going to take a while.

Lee’s achievement was all the more meaningful because it was made at the stadium where he scored his first goal. The Pohang native joined his hometown team in 1998 and made his debut goal during the Adidas Korea Cup match against his current club, Jeonbuk, in March that year.

Lee has had his share of lows in his career. When he made an attempt to play in the European league, spending one season with Werder Bremen and two seasons with Middlesbrough, Lee failed to perform, and when he played for Seongnam FC after returning from Europe, the striker couldn’t play up to expectations, scoring only two goals in 10 matches during the 2008-09 season.

The K League star got his A game back after transferring to Jeonbuk in 2009. Since then, Lee has consistently scored two goals every season to set a new league record for most career goals and is now challenging himself to exceed his own limits.

With a career record of 197 goals, Lee’s next target is being the first player in the K League to make 200 and register himself in the 80-80 club.

“Rather than thinking about the 200th goal, if I score thinking that it is needed for the team’s victory, then the record will come along,” he added.