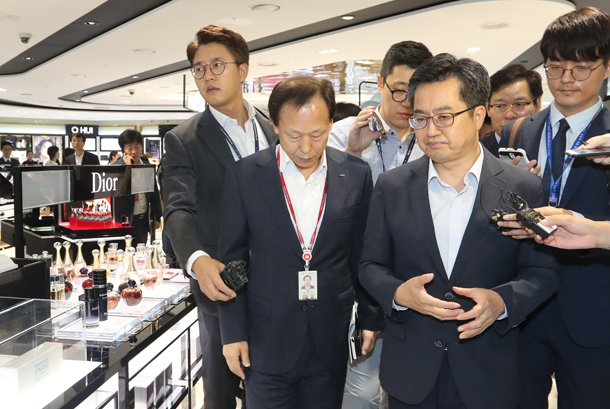 The government plans to overhaul the way it awards licenses for duty-free stores and make the process more transparent.

The country’s finance minister, Kim Dong-yeon, said his ministry would improve the system for duty-free approval while he was at Incheon International Airport on Tuesday en route to New York to join President Moon Jae-in for the United Nations General Assembly.

“After the Board of Audit and Inspection announced the results of its audit of duty-free businesses in July, there has been public demand to improve the licensing system to be more transparent and fair,” Kim said. “When I recently received the plans for improvement, it wasn’t enough to appease the public’s criticism of the evaluation process and its closed-door administration, so I ordered a bolder measure.”

The minister said his office was preparing to change the way it grants licenses to gain the public’s trust. With Lotte’s license for its duty-free store in COEX set to expire in December, Kim said the ministry would come up with an improved evaluation process this month and pursue a bolder overhaul afterward. “The review of fundamental changes will take time,” he said.

The public has pushed for reforms in the duty-free license process after speculation arose last year that President Park Geun-hye’s administration used the licenses as a way to elicit bribes from conglomerates.

The Board of Audit and Inspection in July concluded that the government had intentionally lowered the score of retail conglomerates Lotte and SK when it was evaluating whether to extend their duty-free licenses. As a result, Lotte lost the license for its World Tower store and SK lost its Walkerhill duty-free license in 2015.

The licenses were instead given to Doosan and Shinsegae Duty Free.

It is believed that President Park had personally ordered the exclusion of Lotte in the final roster, telling one of her aides in August 2015 to come up with measures against conglomerates’ oligopoly of the duty-free business. Lotte at the time was the nation’s largest duty-free operator with annual revenue of 2 trillion won ($1.8 billion) and accounted for 50 percent of the local duty-free market. The World Tower location alone made 600 billion won.

When Lotte lost its license, market analysts speculated the reason was its dominance in the industry as well as a public feud between the company’s chairman, Shin Dong-bin, and his older brother Shin Dong-joo on control of the retail empire. Shin Dong-bin had met with President Park in March 2016 and in May donated 7 billion won to an athletic foundation run by Park’s confidante, Choi Soon-sil.

But after Park was ousted from office and the cozy ties between government and business were revealed, public cries for more transparency in the system have been growing.

Minister Kim, during his visit at the airport’s duty-free stores on Tuesday, promised greater government support for the retailers amid a decline in tourism from China. Earlier this year, Beijing banned Chinese travel agencies from arranging group tours to Korea in apparent retaliation against Seoul’s decision to deploy an American missile defense system that China believes threatens its security interests.