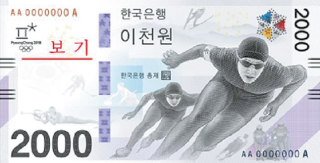 A limited-edition 2,000 won bank note to commemorate the 2018 PyeongChang Winter Olympics has sold out after its preorders began last week. [BANK OF KOREA]

A commemorative 2,000 won ($1.80) bill for the PyeongChang Winter Olympics is soaring in popularity as people flock to buy the rare bank note minted to celebrate the sports event next year.

Commemorative currency typically comes as coins, but the Bank of Korea decided to issue the 2,000 won paper notes, the rarity of which has piqued people’s interests.

The lowest denominations of Korean won are typically the 1,000 won and 5,000 won bills, and this is the first time the bank has issued a 2,000 won note.

With the preorders starting last week, major suppliers reported that the bill has sold out.

All varieties of the 2,000 won bills - both single notes and multiple sheets - sold out on the website of Poongsan Hwadong, an authorized supplier of special coins and bank notes.

The website temporarily went down due to heavy traffic.

KEB Hana Bank, a sponsor of the Olympics, also received preorders at its branches across the country starting Sept. 11, but it ran out of stock as of Monday.

The commemorative bill is difficult to find at other sellers including KB Kookmin Bank, the Industrial Bank of Korea, Woori Bank, Shinhan Bank and Korea Post, though coins remain available.

The central bank said that the popularity reflects the public’s anticipation surrounding the winter Olympics.

“We host the Olympics only every 30 years and it is rare that a 2,000 won bill is printed,” said a source at the Bank of Korea.

The bank will print a total of 2.3 million 2,000 won notes and those signed up for preorders may receive the sheets around December.

The most popular type was the sheet consisting of 24 bills, since all six sellers sold out of the item.

The front side features images of six winter sports including speed skating while the back shows a tiger and pine tree to symbolize Korea.

Preorders will run through Sept. 29.