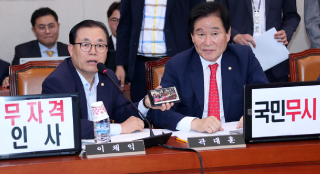 In April 1770, British explorer James Cook landed on the shores of Australia on the Endeavor. The Aborigines were surprised and threw boomerangs at the strangers. Nowadays, the word boomerang is also used to refer to an act or policy that brings consequences back upon its originator.

If a new government loses trust in its leadership, administrative capability and appointment choices, it can be met with the boomerang of distrust. French President Emmanuel Macron appeared in the political scene as a new star, but four months into his term, his approval rating fell to 30 percent due to authoritarian administrative management and failed appointment choices. He is pushing for labor reform, but he lacks traction.

Similarly, there could be boomerangs in security, labor and education for President Moon Jae-in. Some appointment choices may be bad boomerangs. Seven appointees, including Justice Minister Ahn Kyung-hwan, head of the Constitutional Court Kim Yi-su, Minister of Small and Medium Enterprises and Startups Park Sung-jin, were not approved. Chief Justice-designee Kim Myung-soo’s National Assembly approval is not likely to be easy. Minister of Food and Drug Safety Ryu Young-jin had to handle the egg pesticide crisis and safety of sanitary pads. Blue House staff Tak Hyun-min is also a controversial figure. They are being defended despite controversies. Korea Gallup reported that Moon’s rating fell for three consecutive weeks but is still very high at 69 percent, the first time for him to sink to the 60 percent level.

There are more challenges ahead. Appointments are not going smoothly in the 332 public agencies handling state administration. Including the head of public agencies, the president can appoint more than 2,000 positions. Moon’s election camp had 1,000 professors offering advice, and some are politically inspired and claim to have contributed to the election victory.

Some joke that people are lining up in Daejeon, awaiting a call from the Blue House.

As past administrations have proven, appointments made to pay back contributions and based on relationships turn into boomerangs ailing public agencies.

The Moon Jae-in Administration is fortunate. The seven appointment mistakes will be the lesson to prevent further boomerangs, and Moon will be able to eradicate longstanding evils from past administrations.