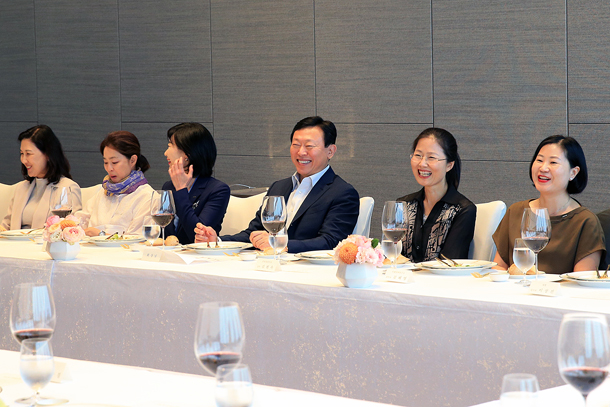 Lotte Group Chairman Shin Dong-bin, center, talks with female executives from Lotte affiliates as the conglomerate seeks to help women break through the glass ceiling, at the Lotte World Tower in southern Seoul on Tuesday. [LOTTE]

Lotte Group Chairman Shin Dong-bin on Tuesday met with female executives from the group’s affiliates in his latest effort to eliminate the glass ceiling within the company.

Korea’s fifth-largest conglomerate said Tuesday that Shin and Hwang Kag-gyu, head of Lotte’s corporate innovation office, met with female executives from the group affiliates to emphasize female leadership and their roles in breaking the glass ceiling within the company. He also took time to listen to the struggles that they face as managers.

“There were only 12 people when I held this kind of meeting back in 2015,” Shin said during the event held at Lotte World Tower in southern Seoul on Tuesday.

“The number has dramatically increased during the past two years… The number of female executives is going to rise continuously,” he added.

Shin also said he is willing to promote female executives to CEO posts if they are qualified enough in terms of capability and potential.

Lotte Group under Shin’s management has been striving to expand the number of female executives ever since he raised the issue in 2006.

“Lotte Group is trying to meet the global standard in terms of transparent management and corporate social responsibility,” Shin said during the meeting. “To achieve that, I hope the female leaders take the lead not only for themselves but also for the team as well,” he added.