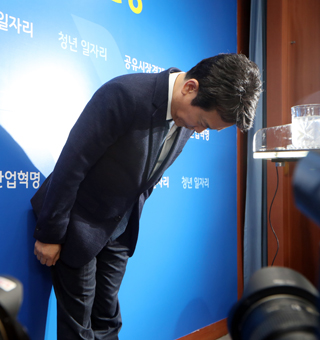 Gyeonggi Governor Nam Kyung-pil apologized to the public Tuesday after his son was detained on drug charges.

“I express my apology as the governor to Gyeonggi residents and the public for another unsavory incident,” he told reporters at the Incheon International Airport. He flew home from Paris after cutting his trip short on the news of the arrest.

“I feel responsible and also miserable at the same time as a father. I do apologize,” he said.

Nam’s 26-year-old eldest son was detained late Tuesday for smuggling and taking methamphetamine. The younger Nam, whose first name is being withheld, tested positive for the drug in a urine test.

He confessed to police that he bought 4 grams (0.14 ounces) of the banned substance, equivalent to about 130 doses, while he was on a trip in China. He admitted taking it a number of times at his home. Police have seized the drug from his residence in Seoul.

He made headlines in 2014 for beating up a lower-ranked soldier while fulfilling his mandatory military service. A military court convicted and sentenced him to eight months in prison, suspended for two years.