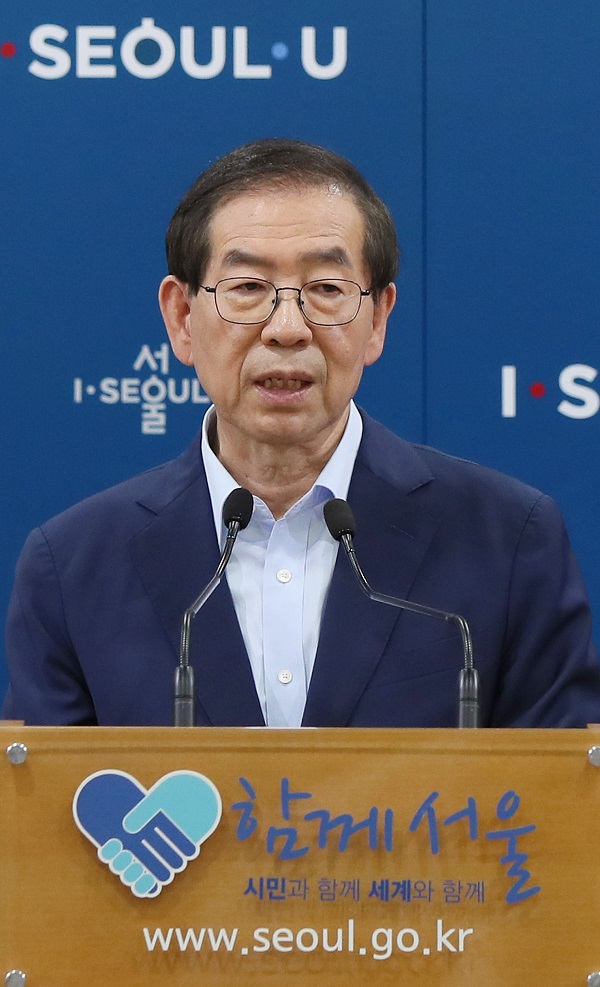 “I have decided to sue Lee and others behind this document written in 2011 against me, and will be filing the lawsuit this afternoon,” Park said in a press briefing at City Hall in central Seoul. “Those behind this crime have incessantly harassed me, my family and the Seoul Metropolitan Government. A taskforce at the National Intelligence Service has also shown that it wasn’t just one person behind these acts.”

Park was referring to the document created at the NIS in 2011 that allegedly designated Park a “pro-North Korea” figure and outlined a set of measures to take against Park’s “leftist” policies. The NIS, in a recent internal probe, said it found 13 cases of its own interference in domestic politics, including the campaign against Park.

“The administration at the time had not only targeted me but the programs of the Seoul city government,” Park said. “This is why the city government could not cooperate on any project with the Lee administration and why so many of our projects, like the free school lunch policy, creation of smaller localities as self-governing bodies within districts and expansion of welfare, were initially shut down by the central government.

“I ask the prosecution to investigate former President Lee thoroughly,” Park added. “He will have to answer to the law and democracy.”
Shortly after President Moon Jae-in took office in May, the NIS created a committee to investigate its own domestic political interference as part of a campaign to clean up its act. Thirteen particular cases were selected in July for internal probes, and all of them occurred during the tenures of the last two conservative presidents, Lee and Park Geun-hye.

One of them was the campaign against Mayor Park.

According to the committee, the NIS created an anti-progressive taskforce in July 2009 under the leadership of Won Sei-hoon, who headed the NIS from 2009 to 2013. It also conducted operations to slander Park in 2009 and 2010 before Park was elected to his post. Park, formerly a lawyer and head of a charity organization, was elected Seoul Mayor in an October 2011 special election.

The committee last week asked the prosecution to launch a formal investigation into Won for violating the law governing the agency, which prohibits its members from meddling in domestic politics. Won has already been convicted for running political operations to help former President Park win the 2012 presidential election.

“I know the committee has already asked prosecutors to investigate Won, but as I understand it, former President Lee was not included in the request, so I am asking the prosecution to investigate Lee as well,” Mayor Park said.

Actress Kim Mi-hwa was one of the blacklisted artists, according to the NIS committee. She told reporters Tuesday she intends to sue former President Lee as well.
“I intend to tell the prosecution everything that happened to me for the past nine years because of the blacklist,” she told reporters on Tuesday, before entering the Seoul Central District Prosecutors’ Office to be questioned as a witness. “The NIS said in its probe that the agency would suppress artists’ opportunities and make reports of these suppressions to the president.

“I cannot believe that after all that he’s done, the former president can walk around in public with his head held high. I want to ask him, if a president tries to spy on and oppress the people of the country, who can trust the president?” she said. "I intend to sue Lee."
In 2010, Kim tweeted, “If such a thing as a blacklist exists, can somebody please investigate this?”

She said she was barred from appearing on KBS programs at the time because of “an internal document circulating at KBS asking directors not to cast Kim.”

Kim Ju-seong, then-head of the planning division at the NIS, was in charge of the operation against artists and cultural leaders, the NIS committee said. It asked the prosecution to investigate Kim for abuse of power.