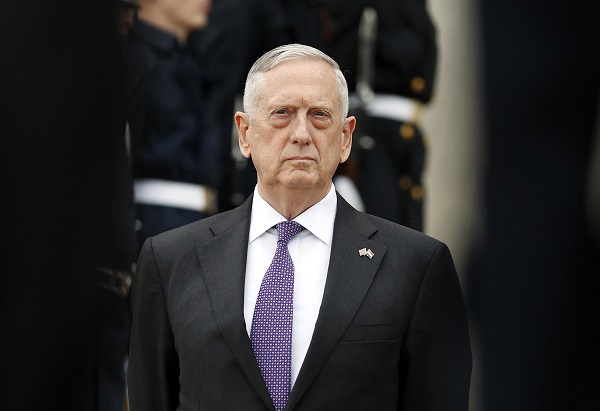 Washington’s rhetoric about military options for dealing with North Korea reached a new phase as U.S. Secretary of Defense Jim Mattis told reporters Monday that one military option wouldn’t put Seoul at grave risk.
But Mattis did not elaborate.

South Koreans are now asking themselves what that option would be, as local military experts speculate about an electromagnetic pulse attack, a high-intensity burst of electromagnetic energy that wipes out power grids, a cyber attack or other possibilities.

Military options against North Korea have always raised fears about the vulnerability of Seoul, which analysts believe would be wiped out by Pyongyang by conventional artillery if the United States ever made a pre-emptive strike on North Korea.

Mattis also acknowledged Monday that he and South Korean Defense Minister Song Young-moo discussed the option of redeploying U.S. tactical nuclear weapons to the South during Song’s visit to Washington late last month, but refused to say whether there was any chance of realizing that idea.

The Blue House has brushed off rumors that the allies were discussing the issue behind the scenes, saying Seoul had no intention to deploy tactical nuclear weapons because doing so would undermine its call for a nuclear-free Korean Peninsula.

The main opposition Liberty Korea Party, which has called for the redeployment, sent a delegation to the U.S. State Department last week and asked Washington to provide the weapons.

Its request, however, was rejected during talks with Joseph Yun, special representative for North Korea policy, and Eliot Kang, acting assistant secretary of the Bureau of International Security and Nonproliferation.

A tactical nuclear weapon, which is designed to be used against battlefield targets, generally travels across short ranges and carries a low-yield warhead.

A strategic nuclear weapon, on the other hand, has a high-yield warhead, travels far distances and is aimed at military bases or a city in a premeditated war plan.

On North Korea’s latest ballistic missile test last Friday, which saw a Hwasong-12 intermediate-range ballistic missile fly over Japan to land in the northern Pacific, Mattis said Japanese and U.S. military bases in Japan did not shoot it down because it wasn’t “directly threatening any of us.”

North Korea is “intentionally doing provocations that seem to press against the envelope for just how far they can push without going over some kind of a line in their minds that would make them vulnerable,” Mattis said.
“So they aim for the middle of the Pacific Ocean, as you know, where at least we hope no ships are around, right?”

Her visit raised suspicion whether the United States was actually considering a pre-emptive attack on North Korea, but an official from the U.S. military denied the speculation, saying Cordray had previously visited in May and that her most recent trip was part of a routine check of local systems.