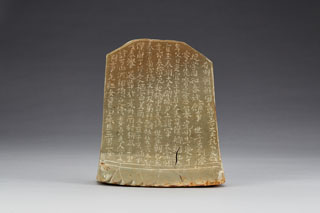 Joseon-era scholar Yi Seon-je’s epitaph tablet made of blue-gray buncheong celadon, which was smuggled out of Korea 19 years ago, was recently repatriated from Japan. [NATIONAL MUSEUM OF KOREA]

A Japanese woman named Kuniae Todoroki, whose late husband purchased the tablet, known as myoji, without knowing it had been smuggled from Korea, handed it over Tuesday morning at the National Museum of Korea. According to the Cultural Heritage Foundation (CHA), the myoji, made of blue-gray buncheong celadon and inscribed with detailed biographical information about Yi, is as valuable as a national treasure.

In the Joseon Dynasty, it was customary to create such myoji, which came in various shapes, with inscriptions about the deceased including date of birth and names of the children, and bury them with the dead.

“The Yi Seon-je myoji was one of my husband’s favorite ancient art pieces,” said Todoroki during the hand-over ceremony Tuesday morning. “While alive, he agonized a lot about giving it back to Korea, thinking about how Yi’s descendants would be longing for the lost tablet of their ancestor. Please treasure this valuable artifact.”

According to the museum, Yi’s myoji was smuggled out of Korea in June 1998 and its whereabouts were unknown until the Overseas Korean Cultural Heritage Foundation tracked it down in 2014. The foundation visited Takashi Todoroki before he passed away, to discuss the repatriation of the tablet. Todoroki was positive about the idea. Last November, his widow decided to repatriate the tablet, which arrived in Korea on Aug. 24.

The Overseas Korean Cultural Heritage Foundation is an affiliate of the CHA, which specializes in researching Korean cultural artifacts located overseas.

Yi’s myoji, which is 28.7 centimeters (11.3 inches) high and 25.4 centimeters wide, is made of buncheong ware using an inlaying technique common in 1454. All four sides of the tablet have inscriptions about Yi in a total of 248 Chinese characters. According to experts, it is said to be in good condition.

“This myoji will act as a crucial material for studies on the history of ceramics,” Lee Su-kyung, a researcher at the museum said. Its unique shape, which looks like an ancestral tablet, with a lotus pattern in the lower part of the myoji and the detailed information increases its historical significance.

“Four myoji from the 15th century made of buncheong ware are each registered as a national treasure, which says something about their scarcity,” Lee added.

The National Museum of Korea will hold a special exhibition of Yi’s myoji from today to Oct. 31.