‘Stay strong and continue to enjoy the game,’ says Beckham

‘Stay strong and continue to enjoy the game,’ says Beckham 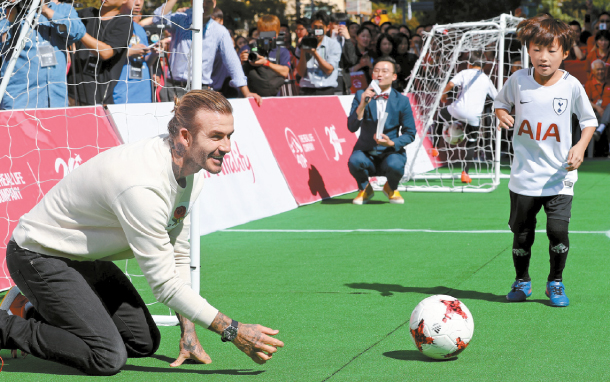 David Beckham said Wednesday he thinks the Korean national football team will overcome difficult situations and become a better team, emphasizing that all teams and players go through adversity.

The 42-year-old retired football star from Britain visited Korea as a global ambassador for AIA, the pan-Asian insurance group, which is celebrating its 30th anniversary in the country, to talk about healthy lifestyle and promote the company’s new campaign “What’s Your Why?”

During a press conference in Seoul, Beckham, who hung up his boots in 2013, said he still loves football and tries to follow what’s happening in the football community.

“I try to follow football all around the world as much as possible,” Beckham said. “Obviously I’ve played it for many years and I’m still a huge fan and will always be a huge fan.”

Beckham said Korea remains a “strong” team in his memory.

Korea qualified for the 2018 FIFA World Cup earlier this month, but their recent performances have been criticized by fans, with many calling for former boss Guus Hiddink to replace current head coach Shin Tae-yong. Beckham said he believes the Taeguk Warriors will overcome their adversity.

“I’m sure they are all mentally strong, physically strong and ready to make the Korean team all successful in every game they play or every competition they go into,” he said. “My advice would be: stay strong and continue to enjoy the game. Because once the enjoyment goes out, then everything changes. I’m sure they’ll push on and they will become a better team.”

As for his personal life these days, Beckham said he is trying to stay disciplined just as he had as a pro footballer.

“Even though I’m not a professional athlete anymore, I still try to live like one,” he said. “It’s about setting the right examples for your children, your family, your friends - and hopefully they take notice. I have four children, and they don’t always take notice, but you try to do your best.”

Beckham, who is married to former Spice Girls member Victoria, emphasized that in order to be a good parent, people should pay attention to “small” things.

“It’s not always that easy to spend as much time as possible with your children because you have other responsibilities,” he said. “It’s the small steps that are important, and it’s the simple things that are sometimes very important.”

This is the first time since 2014 that the former Manchester United and Real Madrid midfielder has visited Korea. Three years ago, Beckham landed in Korea for another corporate tour when he was promoting whisky.

Beckham also came to Korea several times as a player.

Ahead of the 2002 FIFA World Cup, he came to the country for the England national football team’s training camp on Jeju Island. When he was with Major League Soccer team LA Galaxy in 2008, he played in a friendly match against FC Seoul at Seoul World Cup Stadium.

“I’ve been here a few times,” he said, “but this time, I spent a lot more time in the city and enjoyed it.”