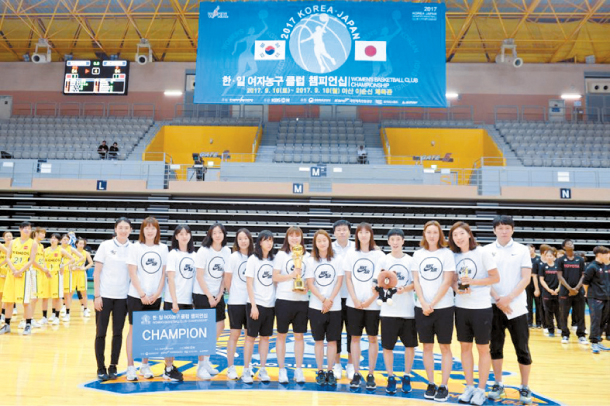 “Victory is sweet, but we don’t put much significance on it other than preparing for the new season,” said head coach Wie Sung-woo in an interview with Ilgan Sports, an affiliate of Korea JoongAng Daily. “Yang Ji-hee and other departures left us lacking more than last season, but the addition of Kim Jeong-eun will make up for it.”

Not many expected Wibee to win since the retirement last season of its center, Yang, who helped lead Wibee to win both the regular and championship series for five consecutive seasons.

But guard Park Hye-jin, forward Kim and forward Lim Yung-hui proved to be more than enough to secure victory. Kim, who joined Wibee after playing for Bucheon KEB-Hana Bank, successfully made five three-pointers during the match, scoring 25 points overall and recording seven rebounds.

Park, the ace of the team, played full time in all three games of the championship.

The Women’s Basketball Club Championship, featuring the winners and runner-ups of the Women’s Korean Basketball League (WKBL) and Women’s Japanese Basketball League (WJBL) included four participating teams - Wibee, winners of the 2017 WKBL regular and championship series; the Antelopes, winners of the WJBL; and the runners-up, JX-Eneos Sunflowers of the WJBL and Yongin Samsung Life Blueminx of the WKBL. Though Wibee’s record of two wins and one loss was tied with JX-Eneos, Wibee was declared the champion of this year’s club championship, as it was based on their head-to-head record.

Upon completion of the game, Lim was named Most Valuable Player. As a veteran, Lim played 39 minutes and 23 seconds in the match, scoring a total of 17 points.

“Lim kept up as a veteran, though her age is a concern and Park is still recovering from injuries,” said Wie. “But we’ll prepare in the time left before the new season and reign again as a champion to maintain our pride.”

Since the 2012-13 season, Wibee had been undefeated and has won its ninth championship game, as well as both the regular season and championship series eight times.

With their fifth consecutive victories in both series last season, they became the second team in the WKBL to achieve such a record, but the Incheon Shinhan Bank S-Birds hold the lead in the category as they’ve won both series for six consecutive years.

The Wibee will be the team to play the WKBL’s opening match, against the S-Birds at Dowon Gymnasium in Incheon at 5 p.m.