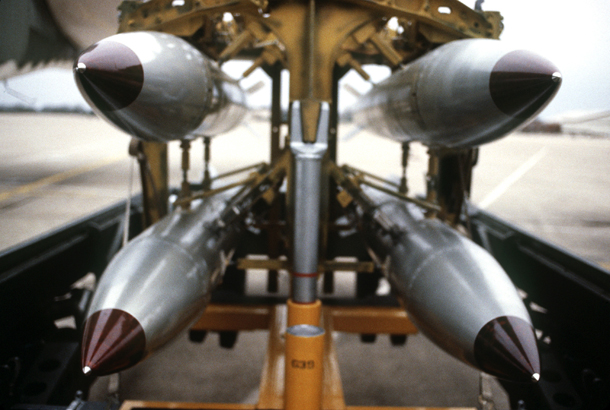 The B61, a type of U.S. tactical nuclear weapons, can be fired from fighter jets. Hundreds of these weapons were stationed in South Korea until 1991, but were pulled out after U.S. President George H.W. Bush declared a reduction of nuclear arms. [U.S. AIR FORCE]

The most painful moment was when I realized we have failed to understand the atmosphere. I was looking at the situation from Seoul’s eyes. I thought that if Korea wants tactical nuclear weapons, the United States would offer them immediately. It was a serious delusion.
Washington’s position is crystal clear. A global nuclear strategy with Russia in mind is the unshakable standard. The redeployment of tactical nuclear weapons on the Korean Peninsula is considered sheerly in terms of how it would affect the nuclear arms race with Russia.

The noteworthy point is that a Soviet-oriented nuclear strategy is still valid today. So, unless Russia makes an extraordinary move, there is no reason to deploy tactical nukes on the Korean Peninsula. In fact, it will only give a justification for Russia to build up nuclear weapons in the Russian Far East.

The considerable cost of delivery and maintenance is also consideration. It is one thing to move the tactical weapons to Korea, but maintaining them also results in tremendous costs.

American experts are also skeptical of the military value. If tactical nuclear weapons are brought in, Pyongyang will surely counter them with new plans, so the weapons won’t be effective. Also, the United States is not pleased with the fact that the American base that would store the nukes would be the first target of not only North Korea but also China.

Yet, the opposition party is advocating the need for tactical nuclear weapons. They are asking for something that the United States has no intention to offer. My visit to Washington D.C. coincided with an opposition Liberty Korea Party delegation’s visit to the United States to ask for redeployment. They surely heard the same story.

I am not saying that we should remain helpless as Washington is not interested in providing tactical nuclear weapons. I am making it clear that a redeployment will not be easy. While the Moon Jae-in administration is reluctant to ask and the United States is not offering them, bringing back tactical nukes is worth consideration. A majority of Koreans also want redeployment.

If South Korea is to ask for a redeployment, a strategy is needed to move the Trump administration. The priority is to give a justification to the U.S. Congress and think tank experts.

10 million Koreans live within 50 kilometers (31 miles) of the Military Demarcation Line. The U.S. Air Force is in Guam, which is 3,200 kilometers away. The Cold War is over in Europe, but tactical nuclear weapons are still stationed in Germany. We can argue that conventional weapons are not enough when we live next to North Korea.

Essentially, the expanded deterrence strategy is based on trust. We have the vague trust that America will help us if anything happens. But it is a naive belief to expect unconditional help from Uncle Sam. The commander-in-chief of the United States is the unpredictable Donald Trump. We must not forget one truth: hope is not a strategy.