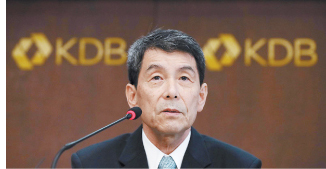 The new chairman of Korea Development Bank, the lead creditor of Kumho Tire, struck an optimistic note about the cash-strapped tire maker’s turnaround during his first media appearance Wednesday since being named head of the state-owned bank.

A deal to sell Kumho Tire fell through earlier this month after creditors led by Korea Development Bank failed to reach an agreement with the preferred bidder, Doublestar, on the price.

The bank then ordered Park Sam-koo, the chairman of Kumho Asiana Group who still holds management rights to the tire maker, to devise a new turnaround plan.

Lee said he is currently reviewing the plan and will meet with creditors next week to decide whether to accept it.

In Park’s proposal, the Kumho Asiana chairman said he would give up management rights to the tire company should his turnaround plan fail. Park lost ownership of Kumho Tire after the group suffered a liquidity crunch in 2009 and creditors purchased a majority of the company in a debt-equity swap.

The turnaround plan includes generating 200 billion won ($176.7 million) worth of paid-in capital sourced from a private equity fund and selling stakes of Kumho Tire’s Chinese operation to the bank.

“The first and foremost concern is whether Kumho Tire can rebuild itself as a viable, manageable entity,” said Lee of Korea Development Bank. “Only when the company develops itself into a viable company that can survive on its own can employment be kept. Only under that circumstance can we make financial support or another attempt to sell the company.”

He maintained a positive view on the fate of Kumho Tire, but when it came to Chairman Park and his stewardship of the company, he took a more cautious stance.

“When I say I am optimistic about Kumho Tire, it means I am positive about Kumho’s potential to improve with certain measures, not about chairman Park Sam-Koo,” he said. “That is a separate matter.”

The Korea Development Bank chairman also touched on the restructuring of other companies, saying the sale notice for Daewoo Engineering and Construction will be out by the end of this month.

As for ongoing restructuring at Daewoo Shipbuilding and Marine Engineering, Lee said no additional state funds were needed because the company’s turnaround is proceeding as planned.