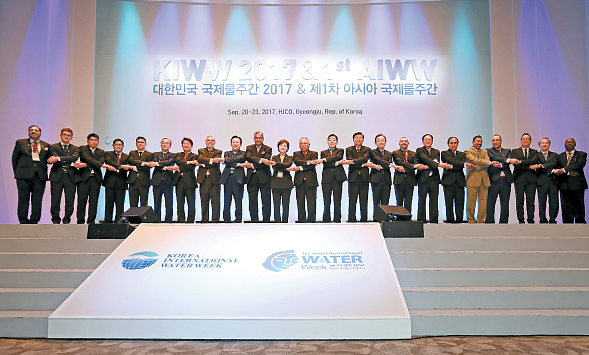 Dignitaries, including Land, Infrastructure and Transport Minister Kim Hyun-mee, pose for a photo during the opening ceremony of the Korea International Water Week 2017, which kicked off on Wednesday and will run through Saturday in Gyeongju, North Gyeongsang. The ceremony was held in Hico in the historic city. [YONHAP]

GYEONGJU, North Gyeongsang - Korea International Water Week 2017 (KIWW), organized by the Korea Water Forum, kicked off in Hico in Gyeongju, North Gyeongsang, with the aim of providing a platform to find solutions for a variety of water-related issues facing the globe.

The objectives of the four-day event include identifying and building effective water partnerships for sustainable development and raising public awareness of issues related to water.

This year’s KIWW event is the second of it kind. The first KIWW was hosted in Daegu last October. In addition to the KIWW, the Asia International Water Week, organized by Asia Water Council, also kicked off Wednesday.

Land, Infrastructure and Transport Minister Kim Hyun-mee was at the event on Wednesday to deliver a congratulatory speech, noting that while Korea suffered from water issues such as shortages and sewage problems during its period of rapid economic development in the 1960s and 70s, it is now a country capable of managing and sustaining its water supply successfully through dam management. “I hope we can share our accumulated efforts and knowledge on water management with you through this four-day event, as well as renew partnerships to counter challenges related to water facing us.”

For the four-day event, 15,000 people from Korea and some 70 nations with various backgrounds - such as government workers, civic group officials and academics specialized in water management - are expected to come to Gyeongju, according to the organizer.

K.G.D. Priyanka, director of the development bureau at Sri Lanka’s Ministry of City Planning and Water Supply, is one of those foreign officials who visited Gyeongju looking to share her experience in the field by giving a presentation on her country’s water treatment process on Thursday, as well as to learn from Korea’s progress in water management.

“Korea is famous for its high quality water treatment system,” she said, “And I wish to learn about Korea’s new technology in the field.”

Among the events held Wednesday was a forum hosted by the Han River Flood Control Office on how to better build resilience against disasters and climate change.

Another session was called “World Water Partnership,” hosted by the land ministry, in which panel members discussed the implementation of solutions easing the effects of climate change and better responding to natural disasters. How to better invest in water infrastructure through multinational partnerships was also discussed.

One of the programs offered by the KIWW is the World Water Challenge contest, slated to take place on Thursday. Contenders will put forward their solutions to solve imminent water problems. This year’s contest is the third of its kind.

The second contest, held last year, was won by Hwang Kwang-taek, chief researcher at the Korea Institute of Ceramic Engineering and Technology. Hwang clinched the top place in the 2016 World Water Challenge contest with his proposal to develop ceramic water filters using natural raw materials at a low cost to help underdeveloped nations in Asia.

KIWW’s organizer, the Korea Water Forum, was established as a non-profit group in 2005 with an aim to “provide a platform for addressing global water issues” and “raise awareness on the importance of water.”