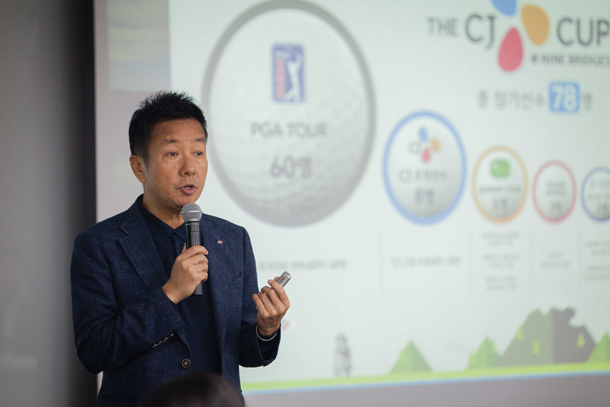 CJ Group said that The CJ Cup, Korea’s first permanent PGA Tour tournament set to kick off for the first time on Oct. 19, will generate at least 200 billion won ($177 million).

At a press conference held Tuesday night in anticipation of the event, the group explained why it was hosting the event and its expected impact, including revitalizing men’s golf in Korea, increasing global interest in Korean culture and generating profit for the local economy.

Held between Oct. 19 and 22 at Nine Bridges in Jeju Island, The CJ Cup will be Korea’s first permanent PGA Tour tournament and one of the three regular PGA Tour tournaments in Asia alongside the World Golf Championships-HSBC Champions in China and the CIMB Classic in Malaysia.

CJ signed a 10-year agreement with the PGA Tour in October to host the event starting from this year through 2026.

CJ expects the local economy to benefit from tourism and accommodation-related profits, as the event is expected to bring more than 40,000 people to the region.

“There’s a town called Augusta [in the U.S.] that’s about the size of Osan, Gyeonggi. Everybody who plays golf knows this little town solely because of a single golf championship called the Masters Tournament. The economic effect for the hosting region is immense,” explained Kyeong.

The conglomerate already has experience hosting the “CJ Nine Bridges Classic” between 2002 and 2005, which was the first LPGA tournament held in Korea.

In regards to Korea’s golf scene, the group’s major initiative for hosting the tournament is to revitalize men’s golf here, which is a lot less successful internationally than women’s golf.

Among the 78 professional golfers that will participate, CJ said that approximately 15 will be Korean through sponsor exemptions - this is the largest number of Korean contestants at any PGA Tour tournament.

The full list of professional golfers involved in the event has not yet been released.

The total prize money set for The CJ Cup is $9.25 million, which is one of the higher prized among the 47 permanent PGA Tour tournaments held around the world.

There will be a series of special events between Oct. 16 through 18, including a pro-am in which amateurs get a chance to play on the field alongside professional players. The official tournament will take place over the following four days.

CJ CheilJedang’s Bibigo will be the main sponsor of the event. The brand runs Korean restaurants and produces ready-made meals.

Bibigo has been the most active among CJ’s affiliates in conducting business abroad and increasing brand awareness. Its ready-made dumplings were the best seller in the U.S. last year. Bibigo will decorate panels and set up snack bars throughout the golf course, as well as airing TV commercials in between the games.

Bibigo’s chefs will present dishes based on traditional Korean food at the Gala Dinner reserved for players and VIPs.

The 13th hole of the 18 hole course was designated as the Bibigo Signature Hole.

The first player to hit a hole in one here will be offered a feast of Korean food made by Bibigo’s professional chefs, including those from well-known hotels, wherever they want in the world. The prize is valued at $50,000.

“In sports marketing, we talk of two benefits: tangible and intangible,” said Kyeong.

“It will be great to make huge sums of money starting from the first year but major sports events like this have to be viewed from a longer perspective and the affect it will bring in terms of brand image is much bigger than merely sales figures.”