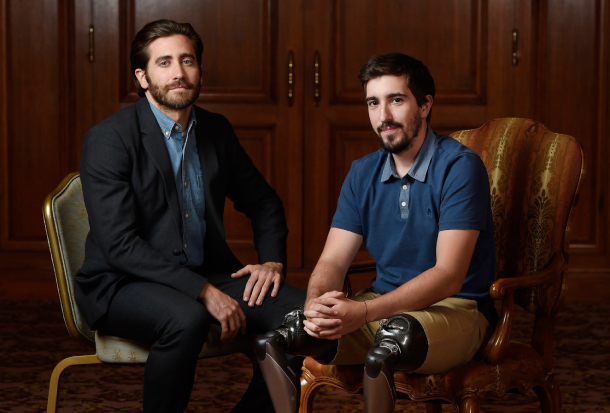 TORONTO - As the cast and makers of “Stronger” collectively rose to take a bow after the film’s Toronto International Film Festival premiere, Jake Gyllenhaal realized that Jeff Bauman, whom he plays in the film and who wears prosthetic legs, was still sitting, overwhelmed with emotion.

“As soon as he got up, everyone else stood up,” said Gyllenhaal. “I realized: This movie just showed them everything he went through just for that moment. I’ve never had an experience like that making a movie.”

“Stronger,” directed by David Gordon Green, is the kind of movie that holds as much drama off the screen as on it. The movie chronicles Bauman’s struggles after the bomb explosion tore through his legs while waiting by the finish line of the 2013 Boston Marathon. He was there to greet his on-again, off-again girlfriend, Erin Hurley, who had previously chided Jeff for never “showing up.”

“Stronger,” based on Bauman’s 2014 memoir, is an undoubtedly inspiring story, but maybe not in the way you’d expect. Honest, painful and funny, it avoids the familiar Hollywood beats for a more truthful tale of personal growth.

“Stronger” captures Bauman, now 31, recalibrating his life after the tragedy, still struggling with relationship and drinking problems that predated the bombing and chafing at the role cast upon him as a heroic symbol of “Boston Strong.” Bauman instead saw himself merely, he says, as: “Just a dude with no legs.”

Bauman’s modesty remains, but he’s also come to terms with being someone who gives hope to others, who can now connect with a wide world of amputees, war veterans and other sufferers trying to get by.

Meeting for an interview at a Toronto hotel shortly after the film’s festival premiere, the close bond between Gyllenhaal and Bauman was plainly evident. In the two and a half years since they began working on the movie together, they’ve gotten to know each other well.

“Since we first met, I think he’s a totally different person now,” Gyllenhaal says. “Particularly in the past year, since getting sober. I think he’s been much more open. “

“Bromance” is a term that has often been applied to their relationship, but Gyllenhaal, 36, is more like an encouraging older brother. He’s helped Bauman through hard times (he and Hurley, previously married and with a three-year-old daughter, Nora, have separated) and gamely accepts Bauman’s playful chiding - like his questioning the depth of the New York-based Gyllenhaal’s Red Sox fandom.

They’ve been inseparable while strolling down red carpets and promoting “Stronger.” “I’m like his shadow,” said Gyllenhaal. Last week, they showed the film to patients and staff at the Spaulding Rehabilitation Hospital, where Bauman worked on his recovery and where they filmed scenes for the movie. In Toronto, Bauman was pleased to see a photo caption misidentifying him as his fiction-film doppelganger. He plans to frame it and give it to Jake.

But in the time they’ve been making “Stronger” (Gyllenhaal is also a producer), both say Bauman has dramatically grown. He’s now 15 months sober and studying engineering in college. Working at Costco at the time of the bombing, Bauman now hopes to work for a prosthetics company. He also moved out of his mother’s apartment and into his own place. Gyllenhaal considers it the film’s biggest accomplishment.