‘Unification is the only way to solve the North Korea issue’

‘Unification is the only way to solve the North Korea issue’ 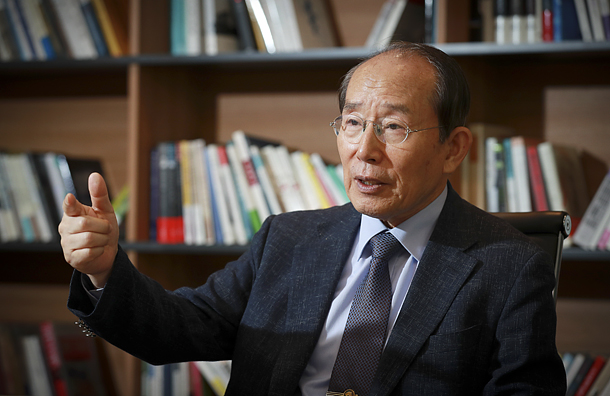 Against the backdrop of rising security threats caused by the North’s nuclear arsenal, we met Kim Hee-sang, a former national security adviser to the president and current chairman of the Korea Institute for National Security Affairs. Conservative and progressive governments alike have recognized Kim as one of the best military strategists the nation has to offer. Kim has previously said that “It will be difficult for Kim Jong-un to give up nuclear weapons because for North Korea, they symbolize the government’s tradition and power,” and that “the only solution [to the nuclear problem] is reunification of the Koreas.” He has also argued that “Now is the last chance for reunification. Some claim that we should have reunified in the mid-80s, before China became so huge. We should try persuading China and Russia that reunification is the only resolution to the North Korean nuclear problem.”

Q. Do you think there is a reason for China’s lukewarm attitude when it comes to solving the North Korean nuclear problem?

A. Chinese leaders think of North Korea as their own territory. During a 2007 testimony in parliament, former U.S. ambassador to South Korea James Lilley agreed that this was their opinion. China is so irresponsible when it comes to solving the nuclear problem because of this attitude. The idea that North Korea is their territory is actually related to China’s larger goal of using its Northeast Project to merge the Korean peninsula’s history into its own.

If we had been more effective at the six-party talks, the situation might be different now. In regards to the North Korean nuclear problem, Russia is uninterested, Japan is interested but not influential enough and the United States doesn’t want to assume the whole burden and so depends on China for action. For the past eight years, President [Barack] Obama has exhibited strategic patience while transferring all the responsibilities of dealing with North Korea onto China. One of China’s Communist Party senior representatives who I am acquainted with told me that “the reason North Korea participated in the six-party talks was to acquire foodstuffs and buy time to develop nuclear weapons.” North Korea has broken its promise. Washington says that dialogue is now difficult. Even U.S. Secretary of State Rex Tillerson has publicly announced that strategic patience has failed.

The Terminal High Altitude Area Defense [Thaad] installment was completed on Sept. 7. How will Chinese-Korean relations look from now on?

Dialogue wouldn’t change China’s sentiment. Before, China thought South Korea was on its side. Former President Park Geun-hye’s September 2015 attendance at a military parade in Tiananmen Square added to the misunderstanding. During a summit meeting with the United States at Hangzhou, China complained that Thaad was infringing on what China considered its security interests. The main rationale behind China’s “Thaad retaliation” is its expansionist ideology. China actually knows that Thaad doesn’t impose any real threat. A Chinese representative from the Ministry of Foreign Affairs acknowledged that “Thaad is not a technical problem, but a strategic problem in the Northeast Asia region.” If Seoul had initially presented it as a response to a nuclear North Korea and more aggressively pushed for installments, we would be facing a smaller problem with Thaad. But now, we have barely completed the temporary installments and China is having other thoughts. The Thaad controversy has to end soon. The earlier the controversy ends, the weaker China’s retaliation will become.

As a pre-emptive attack against North Korea is being discussed, do you think North Korea has real fears?

What North Korea fears the most is a pre-emptive attack. A North Korean insider I met in the United States in 2003 claimed that “North Korea is afraid of U.S. military action,” but that “Pyongyang is developing nuclear weapons in the assured belief that China won’t be disloyal, South Korea will forbid an attack on the peninsula, and the United States will remain only verbally belligerent.” This insider often moves back and forth from North Korea and conveys Pyongyang’s sentiments to Washington. After it became evident that Hillary Clinton was going to be nominated as the Democratic Party’s presidential candidate, he warned a Clinton aide that “a pre-emptive attack to North Korea will mean war.” He relayed the same opinion to Donald Trump after he was elected. President Trump, however, is now sincerely reviewing a pre-emptive attack.

The South Korean government disagrees with the United States when it opposes a military attack against North Korea. Does this mean the realization of “Korea passing”?

It is unfortunate that Seoul has so clearly expressed its opposition to warfare. This is no different from assuring North Korea not to worry and continue developing its nuclear weaponry. We could have contained North Korea by simply cautioning it that there could be American military action with South Korean cooperation. In the past, we could have solved the North Korean nuclear problem by destroying the nuclear and missile bases. Now, it can only be resolved by removing Kim Jong-un, as well. This is why we should frighten North Korea with the possibility of an attack. I believe President Trump had the same idea in mind when he mentioned a possible attack against North Korea.

If military punishment seems difficult, could a peace deal be the solution, as former U.S. Secretary of State Henry Kissinger claimed?

A peace deal brings the discussion back to the withdrawal of the U.S. Army in Korea. Like China, North Korea continues to demand the Army’s withdrawal. Though the United States is across the Pacific Ocean from Korea, China is right beside us.

The strategic balance can be only maintained with the U.S. Army in the peninsula. If American soldiers leave, the balance will shift towards China. This is why China is urging for a peace deal. But then, Korea could become a second Tibet. Once Washington takes an interest in a peace deal, South Korea will be at a loss.

What solution do you offer to solve the North Korean nuclear problem?

As President Moon said, only South Korea can resolve the problems in the peninsula. Reunification is the only answer. Once North Korea has nuclear power, it will not let go of its ambitions to reunite the Koreas under a Communist ideology. North Korea’s nuclear weaponry is like a double-edged sword. It is both an opportunity and a crisis. We have to transform this into an opportunity for reunification. Actually there were opportunities to reunite before in 1994 and 2006. Washington is regretting the times it delayed in militarily punishing Pyongyang. Reunification would have been possible if we had acted properly in 1994, but now it will only be likely with a considerable amount of damage done. Ten years later, reunification will be impossible even with much greater injuries. Now is the last opportunity.