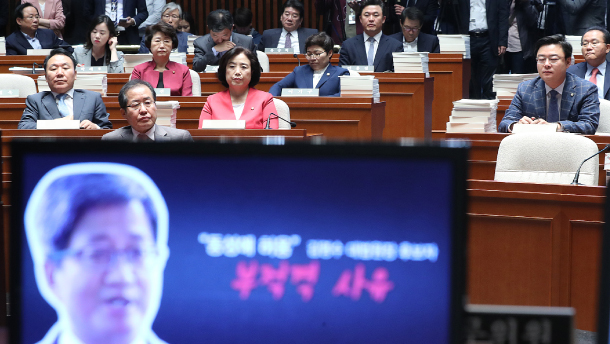 Lawmakers of the conservative opposition Liberty Korea Party hold a meeting in the National Assembly on Wednesday to discuss how to deal with the motion to endorse the Supreme Court chief justice nominee. [YONHAP]

The Blue House and the ruling party made a final push to persuade the People’s Party on Wednesday, the eve of the National Assembly’s vote today on a motion to confirm President Moon Jae-in’s nominee to head the Supreme Court.

According to sources, Moon telephoned Chairman Ahn Cheol-soo of the People’s Party and Rep. Kim Dong-cheol, its floor leader, on Monday before he left for New York to attend the United Nations General Assembly. Moon reportedly sought their support to pass Judge Kim Meong-su as Supreme Court chief justice.

Ahn also confirmed Wednesday that he received the phone call from Moon. “I told him to have a healthy and productive trip,” Ahn said.

Before leaving, Moon had already issued an appeal to lawmakers to confirm his nominee, saying he regretted that his efforts were not enough.

The Democratic Party is trying to arrange a meeting between its chairwoman, Choo Mi-ae, and Ahn Thursday morning before the voting takes place in the afternoon. “I proposed the meeting to seek cooperation to smoothly resolve pending issues,” Choo told reporters on Wednesday.

According to sources, Ahn reportedly agreed, but later expressed discomfort that the meeting proposal was reported by media.

The party also had a meeting of its lawmakers and agreed that all its 121 representatives will mark one opposition lawmaker each to seek their support. “If it means we have to beg, we will,” said a first-term lawmaker.

While the conservative opposition Liberty Korea Party and Bareun Party made clear their rejection of Kim’s nomination, the People’s Party decided to let its lawmakers vote freely.

It remains to be seen if the People’s Party lawmakers will support the nominee this time, because it did not do so for Moon’s nominee to head the Constitutional Court.

Earlier this month, the National Assembly struck down a motion to confirm Constitutional Court Justice Kim Yi-su as the court’s new head.

Of the 293 lawmakers who attended the session, 145 voted to support Kim’s appointment and 145 opposed, while one lawmaker abstained and two votes were counted invalid. Two votes shy, the motion was voted down. At the time, the two conservative parties already voiced their opposition and winning the People’s Party’s votes was crucial. The People’s Party allowed a free vote for its 40 lawmakers, and the majority apparently voted against Kim. As of now, the Democratic Party occupies 121 seats and its ally, Justice Party, has six lawmakers in the 299-member legislature. The Liberty Korea Party has 107 and the Bareun Party has 20.

Sources from the People’s Party said the situation is more favorable now. “It seems the mood is better than the voting of Kim Yi-su,” a source said. Some lawmakers are already making public their support for Kim Meong-su as the new head of the Supreme Court.

The People’s Party said it will hold a general assembly of lawmakers at 9 a.m. this morning to exchange final opinions.