Trump threatens to ‘destroy’ North in speech at UN

Trump threatens to ‘destroy’ North in speech at UN 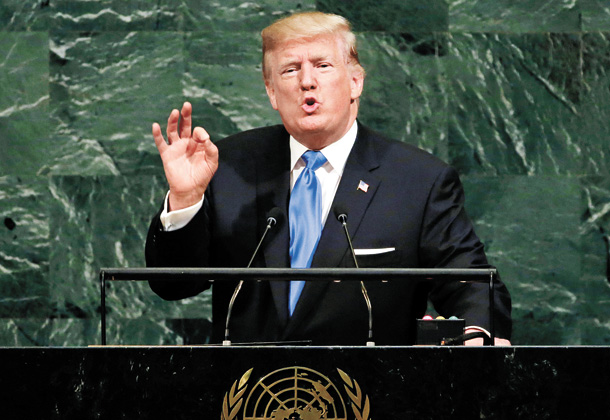 “The United States has great strength and patience, but if it is forced to defend itself or its allies, we will have no choice but to totally destroy North Korea,” said Trump in his first address to the 193-member UN General Assembly in New York. “Rocket Man is on a suicide mission for himself and for his regime.”

Trump continued in his 42-minute speech, “The United States is ready, willing and able, but hopefully this will not be necessary. That’s what the United Nations is all about… Let’s see how they do.”

He added, “It is time for North Korea to realize that the denuclearization is its only acceptable future.”

Trump called North Korea “depraved” and also described it as a “scourge of our planet today.” He said rogue regimes “violate every principle on which the United Nations is based.”

He ran through a list of human rights abuses by the regime, including the “assassination of the dictator’s brother using banned nerve agents in an international airport,” in reference to Kim Jong-nam’s death in Malaysia in February. Trump also mentioned the death of American university student Otto Warmbier who had been detained in North Korea and died after his return to the United States in June.

Pointing to the 15-member UN Security Council’s most recent two “hard-hitting” resolutions on North Korea, Trump went on to thank China and Russia for “joining the vote to impose sanctions.”

He continued, “But we must do much more. It is time for all nations to work together to isolate the Kim [Jong-un] regime until it ceases its hostile behavior.”

In the speech, Trump called it “an outrage that some nations would not only trade with such a regime, but would arm, supply, and financially support a country that imperils the world with nuclear conflict,” an obvious jab at China.

Trump also reiterated his “America first” slogan in his address to the United Nations.

After his speech, Trump tweeted that the United States - which he represented through an American flag emoji - “has great strength & patience, but if it is forced to defend itself or its allies, we will have no choice but to totally destroy #NoKo,” referring to North Korea.

North Korean Ambassador to the UN Ja Song-nam was spotted bolting out of the General Assembly hall ahead of Trump’s address. A junior diplomat was left as the North Korean representative in the assembly.

North Korean Foreign Minister Ri Yong-ho is scheduled to give an address to the UN General Assembly Thursday and could respond to Trump’s speech. Ja’s boycott comes as North Korea faces frostiness and isolation by other member states following its sixth nuclear test this month.

Trump is no stranger to inflammatory rhetoric in regard to the North, having threatened the regime with “fire and fury” in June.

Trump’s remarks came ahead of his second bilateral meeting with President Moon Jae-in on Thursday in New York, a follow-up to a summit in Washington at the end of June, where the two are expected to focus on how to respond to North Korea’s provocations. Moon and Trump will also hold a trilateral meeting with Japanese Prime Minister Shinzo Abe later that day at a working luncheon.

Trump’s bellicose rhetoric on Pyongyang is seen by some observers as being linked to plans to try to sell U.S. arms to Seoul and Tokyo ahead of talks with their leaders.

Earlier this month, he tweeted that he is “allowing” Japan and South Korea “to buy a substantially increased amount of highly sophisticated military equipment from the United States.” U.S. Defense Secretary Jim Mattis told reporters at the Pentagon after Trump’s UN address, “We are dealing with the North Korea situation through the international process, and we will continue to do so with [Secretary of State Rex] Tillerson leading the effort.”

He underscored, “And we will hopefully get this resolved through diplomatic means.”

However, she did not point out that Obama, in that same interview, dismissed the option, adding that “aside from the humanitarian costs of that, they are right next door to our vital ally, Republic of Korea.”

South Korea’s Blue House said in a statement Wednesday that Trump’s address showed a “firm and concrete position” and that Trump allocating “an unusually long time” speaking of the North Korea nuclear issue in his UN speech “indicated how seriously the U.S. government views the problem.”

Blue House spokesman Park Soo-hyun continued, “The speech reconfirmed - as the two countries’ leaders have repeated before - maximum pressure and sanctions have to be taken against North Korea’s nuclear and missile provocations and that North Korea has to realize that denuclearization is its only acceptable future.”

He added the two countries will continued to closely cooperate and consult on the matter.

A key Blue House source told reporters about Trump’s speech, “This seems to be a part of his usual position that aside from maximum pressure and sanctions through economic and diplomatic measures, there is also a military option.”

He added that this is in line with Washington’s position that “when economic and diplomatic measures fail to bring North Korea to the negotiating table and it poses a threat to the United States, a military option will be the last choice undertaken.”