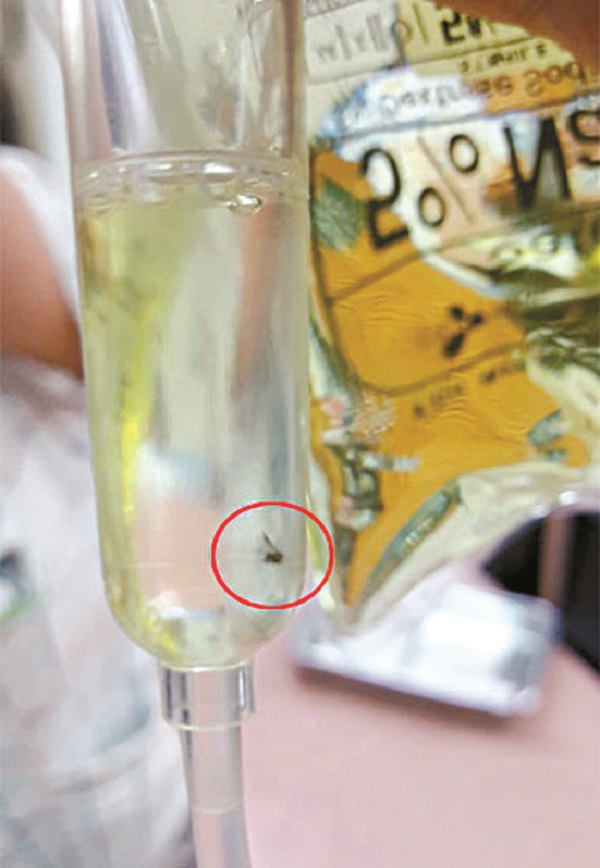 A fly was found in an intravenous(IV) bag administered to a five-month-old baby at Ewha Womans University Mokdong Hospital in western Seoul, while another bag at Inha University Hospital in Incheon had what appeared to be a cockroach inside it, the Ministry of Food and Drug Safety announced Tuesday.

Doctors ran a blood test on the baby Tuesday, two days after the incident, but found no bacterial infection. A second blood test will be performed Friday. The cockroach at Inha hospital was discovered before the fluid bag was used on any patient.

Local health authorities alluded to the possibility that two local companies that supplied the goods to the hospitals were to be blamed for poor management of their products. That refers to SungWon Medical for the case at Ewha, and Shin Chang Medical for Inha.

SungWon Medical said in a statement that its IV bag was produced by Medic-Pro Corporation, based in the Philippines.

The Ewha case took place on Sunday at 7:35 p.m., when a five-month-old baby who was hospitalized for urinary tract infection was treated with IV fluid. The baby’s parents detected the fly in the bag nearly two and a half hours later, and reported the case to the hospital staff. Ewha Womans University Mokdong Hospital reported the discovery to the Ministry of Food and Drug Safety the next day.

SungWon Medical, which sold the bags to the Ewha hospital, said the products were made by the Philippine company Medic-Pro Corporation, and that its sole involvement was sterilizing them with a compound called ethylene oxide.

That excuse hardly freed SungWon Medical from censure, according to Yoo Hee-sang, head of the Pharmaceutical Safety Evaluation Division under the Food and Drug Safety Ministry, who said the company had ignored the vital, final check-up procedure.

“SungWon Medical skipped the steps checking whether its products were polluted by any substance, whether they had the right measurements and were marked by the correct indications,” said Yoo. “It appears that an insect got inside [one of the fluid bags] due to these certain missteps.”

The ministry said that its officials were planning to personally visit the Philippine company for an overhaul.

The cockroach at Inha University Hospital was discovered Monday, when a nurse who reported finding it while preparing to use the IV bag for a patient.

The Food and Drug Safety Ministry advised both hospitals not to use the products and said it would slap a penalty on the medical supplies companies banning them from manufacturing any goods for about a month or two. Nearly 40,000 products of the same fluid bag sold to Ewha have been distributed, while the other one at Inha have sold nearly 70,000, according to the ministry.

Health authorities vowed to launch a “special inspection” week next week for an all-out overhaul of IV fluid bags used in local hospitals, while checking how companies supplying the goods managed the imports.

“When an insect lands inside an IV fluid bag, the polluted substance can directly flow into the patient’s heart or brain, which could really lead to disastrous results,” warned Kim Ui-seok, a doctor at the Department of Infectious Diseases at Seoul National University Bundang Hospital.
BY LEE MIN-YOUNG, JEONG JONG-HOON [lee.sungeun@joongang.co.kr]