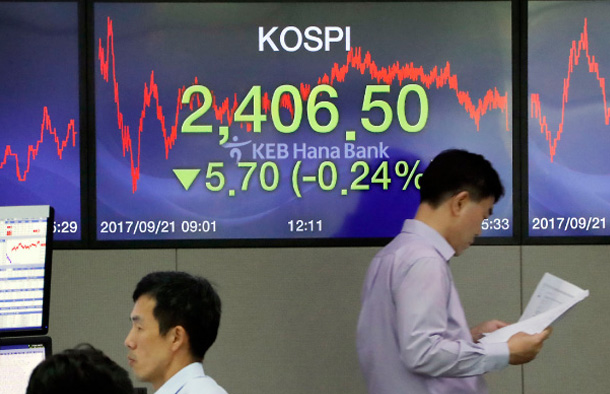 The board at KEB Hana Bank’s headquartes in central Seoul shows the Kospi closing slightly lower than the previous day. The market was only somewhat affected by the Fed’s decision Wednesday to cut back on its balance sheets. [YONHAP]

The U.S. Fed’s decision to pare down its trillions of dollars in bonds and mortgage-backed securities barely swayed market sentiment in Korea on Thursday.

The Kospi edged down 0.24 percent to 2,406.50 from the previous day as foreign and institutional investors moved to sell stocks.

But the won weakened against the dollar since the currency was the biggest beneficiary of the Fed announcement.

After a two-day meeting, the U.S. central bank on Wednesday decided to gradually unwind its $4.5 trillion balance sheet starting next month.

The chief of the Bank of Korea, however, brushed off concerns that the tightening move from the United States would place pressure on the local markets.

“The decision was largely in line with expectations,” said Governor Lee Ju-yeol. “The Fed announcement might sound a bit hawkish, but it would have little effect on domestic financial markets.”

Lee’s view was echoed by the Ministry of Strategy and Finance.

Alongside the unwinding of its assets, the Fed also sent clearer signals that it is preparing for another rate hike in December.

Some market analysts forecast that the two-pronged monetary policies will translate into an increase of market interest rates, which can, in turn, place further pressure on debt borrowers.

“The September FOMC results might vary depending on timing,” said Shin Eol, a fixed income analyst at Shinhan Investment.

“As a consequence, it will act as a trigger to raise market interest rates in the short term,” he said.

A rise could hurt financial stability in the country as Korea is saddled with record-high household debts.

Household debt has topped 1,439 trillion won ($1.27 trillion) as of the end of July, according to Chae Yi-bai, a lawmaker of the opposition People’s Party. He quoted data from the Korea Credit Information Services.

The Fed’s gradual hike also could push the Bank of Korea to consider an interest rate hike because the key interest rate in the United States is on the brink of surpassing that of Korea.

Analysts believe that the higher rate in the United States might cause a capital flight to that country.

Governor Lee acknowledged the concern, but that it wouldn’t be a defining factor in the rate-setting decision.

“There will be problems if the gap between the interest rates of the two countries widens,” he said, “We can’t just factor in the gap. [The Bank of Korea] may need to consider domestic consumption, consumer prices and geopolitical risks.”

In June, the Fed raised its benchmark rate to a range of 1 percent to 1.25 percent, a level that matches Korea’s record-low rate of 1.25 percent.

The precise timing of a rate hike remains unclear, but there are signs that the central bank is veering toward a tightening stance.

According to the minutes of a monetary meeting on Aug. 31, several members of the Bank of Korea’s Monetary Policy Committee raised the need to shift towards tightening.