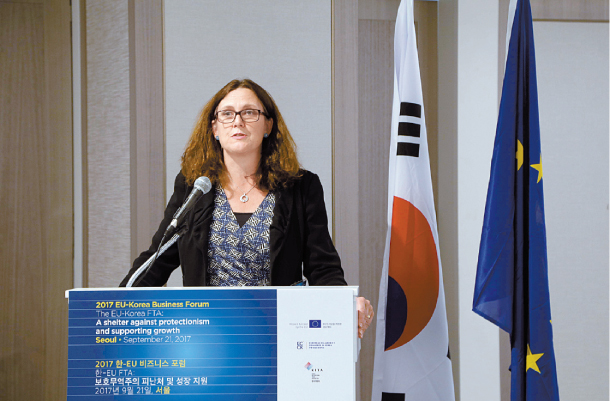 Over the past six years, the Korea-EU Free Trade Agreement has eliminated 99 percent of customs duties between the two markets, the European Union’s trade commissioner said during a conference in Seoul on Thursday.

“Many people realize that protectionism does not offer protection,” said Cecilia Malmstrom, who is visiting Seoul this week with a trade delegation from Europe, “and I know Korea is one such place and so is the EU.”

The volume of goods and services exchanged between Korea and Europe has risen significantly compared to global trade following the 2008 financial crisis, according to an assessment of the FTA by the EU trade delegation. Since July 2011, Korean exports to Europe have grown faster than those from Japan, Taiwan and Malaysia.

In a qualitative assessment conducted in September last year, 90 percent of Korean and European companies responded positively to the FTA, saying they benefited from the agreement and tariff cuts.

The reaction from consumers has been positive as well, based on the results of a Korea Consumer Agency survey last year in which local consumers said they felt product variety from Europe had improved after the FTA went into effect.

“From the European Union’s side, [the FTA] was the first of its kind,” Malmstrom told the Korea JoongAng Daily, “the most ambitious and far-reaching. It has worked well - exports have increased and so has trade, contacts and investment.”

Malmstrom has been representing the European Union on trade issues since 2014. Although her overall assessment of the FTA was positive, she said that there were still issues that remain unsolved, including Korea’s ban on European beef implemented in 2000 after a major outbreak of mad cow disease.

Another concern is the Korean government’s limited fulfillment of labor issues, on which Malmstorm said Korea had only ratified four out of eight conventions suggested by the International Labour Organisation regarding labor rights. She expressed upbeat expectations for the current government, which she believes has a different view on the issue.

Other speakers at the Korea-EU Business Forum noted that trade relations between Korea and Europe still left much to be desired.

Lee Dong-bok, head of trade research at the Korea International Trade Association, noted Korea had a trade surplus with Europe until 2013, when it turned to deficit. “The deficit is much smaller this year at around $100 million as of July,” he said. “In 2014, it reached $10 billion.”

Lee explained that the deficit was not prompted by the FTA per se but because of crude imports from the United Kingdom after sanctions on Iran began and a decline in exports by Korean shipbuilders due to a global order drought.

Another concern raised by forum attendees raised was the price of EU goods, especially luxury products, that don’t reflect tariff cuts after the FTA’s implementation.

In response, Prof. Cheong In-kyo of Inha University said the government could not control the prices that companies charge.

Christoph Heider, president of the European Chamber of Commerce in Korea, added that the FTA should be seen from a longer view rather than the perspective of short-term deficits and price negotiations.