‘Kingsman’ stars make stop in Korea : The sequel to the hugely popular 2015 film comes to theaters on Sept. 27

‘Kingsman’ stars make stop in Korea : The sequel to the hugely popular 2015 film comes to theaters on Sept. 27 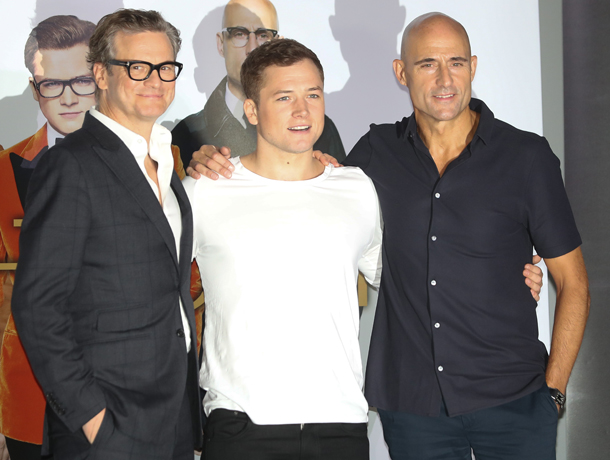 The three main characters of “Kingsman: The Golden Circle,” the sequel of the popular “Kingsman: The Secret Service” (2015), pose for a photo after meeting with the Korean press on Thursday. From left is Colin Firth, Taron Egerton and Mark Strong. [YONHAP]

To promote the upcoming “Kingsman: The Golden Circle” slated to hit theatres on Sept. 27, three gentlemen spies have suited up and traveled to Seoul to meet with Korean fans. Having arrived in Seoul on Tuesday, Colin Firth, Taron Egerton and Mark Strong met with Korean press on Thursday morning at the Yongsan CGV Cinema in central Seoul and revealed their thoughts about the movie, and expressed their gratitude towards Korea for the enthusiastic welcome. 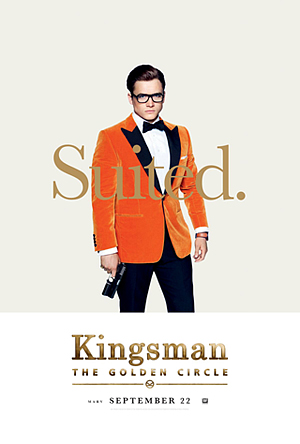 A poster from the upcoming movie, slated to hit theaters in Korea on Sept. 27. [20TH CENTURY FOX]

“This is my second trip to Korea, and we have had the most incredible time here,” said Egerton. While Egerton, youngest of the three, visited Korea in March 2016 with Hugh Jackman, Firth and Strong have made their maiden voyage to the country.

“It has been an amazing welcome, I don’t think I’ve ever experienced anything quite like it,” said Strong. “The fans have been so amazing. It’s such a pleasure to be able to come here and bring the second ‘Kingsman’ to an audience so appreciative.”

When most people think of an action spy movie, they picture either James Bond or Ethan Hunt from “Mission: Impossible” fearlessly jumping off a highway. When “Kingsman: The Secret Service” came along in 2015, the genre took on a completely different tone from the conventional spy movie. Clad in neat suits and oxford shoes, the gentlemen spies keep their classy elegance even in a combat, saving the world from evil.

“It’s very special for us to be here, because we all feel this film has a special relationship with this country,” said Firth. “This is my first trip here, but that’s how I feel. And that’s why I felt it was so important for us to come here. We haven’t been all over the world with this - I’ve been in America, the U.K. and here. And I felt that if there’s anywhere I wanted to bring ‘Kingsman’ the film, it’s here in Seoul.”

The first “Kingsman” movie attracted over six million local moviegoers in 2015 with much fanfare, and the fans are eager to see how the gentlemen are going to save the world this time.

Eggsy, played by Egerton, was just a rookie hoping to become a gentleman spy himself in the first movie, but now, he’s fully grown and ready to save the world from a maniac billionaire named Poppy, played by Julianne Moore. Aiding Eggsy are Merlin, played by Mark Strong, the genius behind the Kingsman’s spectacular weapons, and Galahad (Colin Firth) who has been miraculously “resurrected” after he was shot dead in the first movie by the super villain.

In the sequel, the Kingman’s headquarters has been destroyed by the mad villain, and the three men travel to the United States to join forces with their brother organization, “The Statesman.” “It was wonderful for us to have new people to act with,” said Strong. “It takes the film to another level, which I think the sequel always needs to do.”

Harry, a character in the “Kingsman” films, played by Colin Firth, has been “resurrected,” according to Firth, after the character was killed in the first film. [20TH CENTURY FOX]

Meanwhile on Wednesday evening, over three thousand fans turned out at the Lotte Jamsil Tower in southern Seoul to catch the three actors up-close at a red carpet event. Fans cheered, and those who got the chance to take photos or get autographs of their favorite character were overwhelmed with joy, until shortly after.

After the three actors finished the red carpet event, they were supposed to greet fans before the film screening. The event was suddenly cancelled without much explanation to the fans, some of who claimed that they had been waiting for over 24 hours to meet their favorite stars, according to social media posts.

A formal apology followed hours later on 20th Century Fox Korea’s Facebook page. The post read: “The live broadcast was delayed due to technical difficulties, and we decided that it was inevitable to call off the broadcast as a whole. The cancellation was due to a miscommunication among the staff, and we had to move the actors to their accommodations… We’ll be quick to follow with appropriate measures and compensation.”

Oh Sang-ho, president of 20th Century Fox Korea, apologized for the company’s “insufficient proceedings of the event.” The cancellation apparently came about because the live broadcasting system wasn’t working, and the Busan team called off the live broadcast, but the staff in Seoul understood the call as a total cancellation of the event. “We give our sincere apologies for our shortcomings, and we’ll put the Korean fans first and make sure to get back to them soon,” said Oh.

After completing their scheduled live talk with fans on the Naver V app, the crew flew back to London.