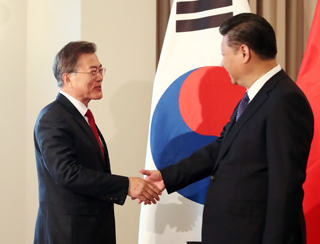 China’s territory stretches 5,500 kilometers (3,418 miles) from the Pamir Mountains in the West to the Ussuri River in the East. Reflecting this geographical characteristic, maps of China are produced in a rectangle with long horizontal sides. In the rectangle, the South China Sea is inserted in a box in the corner.

When Chinese President Xi Jinping became president in 2012, he advocated a slogan to make a rich and great country and summed it up in the phrase “Chinese Dream.” The 100 years of the Opium War was defined as a chaotic and shameful past, and the Chinese Dream was intended to recreate the great nation in the 100 years from 1949, when the Chinese Communist Party came into power.

The map distributed since 2014 reflects the national development strategy. The South China Sea in the small box in the corner is now included in the rectangular map. The map is sending out the message that the South China Sea is within China’s influence as much as mainland China.

The basis of the Chinese Dream is the ambition to have China’s hegemony acknowledged, at least in East Asia. The Guam base North Korea threatens to strike is the stronghold of U.S. Navy and Air Force that supports American hegemony in the Asia-Pacific region. Therefore, it is the priority target in the region of the People’s Liberation Army (PLA).

China claims that the Terminal High Altitude Area Defense (Thaad) system deployed in South Korea is a threat, as it can detect the location of the PLA’s strategic missile if China launches it in case of emergency. It breaks the strategic balance between the United States and China. Beijing adheres to this even when Seoul explains that Thaad only defends against North Korea’s nuclear and missile threats and will be withdrawn if the North Korean nuclear program is removed.

On the other hand, Beijing’s position reveals how it feels about North Korea’s nuclear program. They fundamentally oppose Seoul’s solution of linking Thaad with the North Korean nuclear threat because Beijing believes Thaad is related to China’s immediate interests. When the internal power structure is settled at the 19th Party Congress, Xi can afford to focus on Thaad and North Korea.

It will be a turning point for the deadlocked Korea-China relations.

A diplomat experienced in China affairs said that Seoul must take advantage of the watershed event even though Chinese diplomats instinctively dislike unpredictable and unstable situations.

However, the Blue House offices of security and policy, which oversee diplomacy and economy, lack a professional workforce specializing in China. One junior official has been dispatched from the Foreign Ministry’s Department of Northeast Asia to the Blue House.

As China approaches South Korea in both hawkish and dovish ways to pursue its core interests, Seoul needs the backing of professional working-level experts in order to see through China’s intentions and not be flustered.