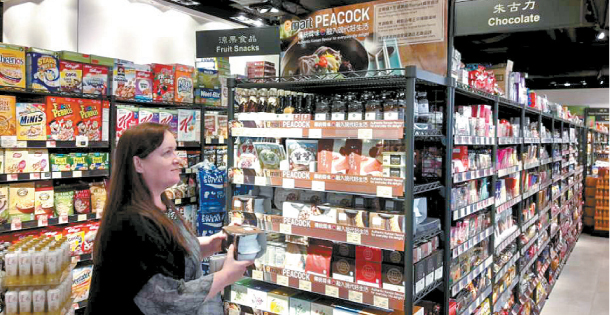 A shopper browses Market Place’s selection of Peacock food products at the K11 shopping mall in Hong Kong. Emart has signed a deal with supermarket chain Wellcome to sell Peacock products at its stores. Market Place is an affiliate of Wellcome. [EMART]

The retailer said Thursday that it had signed a deal with the Hong Kong supermarket chain Wellcome to sell Peacock products at its locations.

Wellcome is one of Hong Kong’s biggest retailers. Its parent company, Dairy Farm International Holdings, made over $20 billion last year from more than 6,500 stores in 11 countries across Southeast Asia.

Emart will start by putting 107 of its Peacock products in 57 Wellcome stores. Peacock products have been exported to foreign countries before as one-off events, but this is the first time the products will be officially sold in overseas retail channels, the company said.

“The number of branches that sell Peacock brands will continue to expand,” Emart said in a statement. “This year, we plan to raise revenue of 600 million won [$530,000] and 4 billion won next year.”

Korea’s largest discount chain is also advancing into the American market, where it plans to rebrand Peacock as Emart PK and work with manufacturing partners in the United States. Distribution will start in regions with large Korean populations such as New York, Chicago and Texas.

The retailer will start with 1,000 supermarkets in the United States and expand by 600 to 700 from October.

Emart said it has been researching the American market since May 2016 to rework Peacock products based on local consumer preferences. For example, the quantity of a single product has been raised from 500 grams (1 pound) to 550 grams.

“Even with rising demand for Korean food, there is no decent Korean packaged food being sold in the United States,” an Emart America official said. “I believe the launch of Peacock in America will solve the issue.”

Peacock is the brainchild of Shinsegae Group Vice Chairman Chung Yong-jin and makes both frozen and instant food products. In its first year, 2013, the brand brought in 34 billion won revenue. Last year, it made 190 billion won.