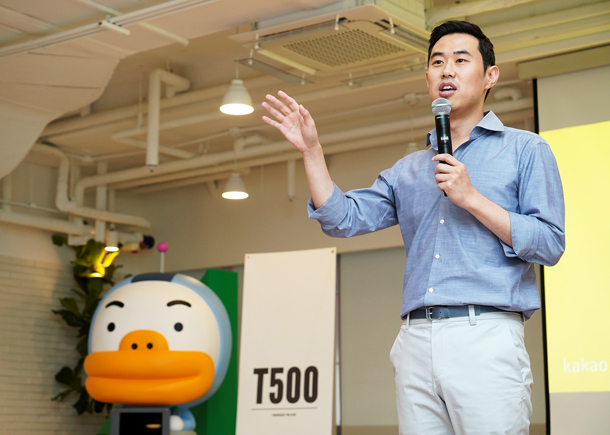 SEONGNAM, Gyeonggi - Kakao CEO Rim Ji-hoon declared in October 2015, a month after his inauguration, that the operator of KakaoTalk mobile messenger believes its future growth would come from on-demand services, which Koreans refer to as offline-to-online (O2O) services.

In the past two years, the company came up with a series of services linking specific offline services with customers on smartphone apps, including Kakao Taxi, a taxi-hailing service modeled after Uber, and Kakao Driver, a designated driver service, but few have been successful. The company was even forced to give up on some projects.

The CEO used his first casual meeting in two years with the local press Wednesday to lay out the company’s renewed vision.

“Kakao Driver, in particular, didn’t work as well as expected and I realized that was my mistake,” he told reporters. “We let go of several projects that we had been preparing for a long time, including a housekeeper service. The decision was very painful. But one positive fruit is that the fields Kakao should concentrate on became clear.”

In a related vein, Kakao unveiled a map of its artificial intelligence ecosystem, built around the so-called Kakao I platform, hours before the press event. The platform, which integrates features such as voice recognition, image recognition, natural-language processing and translation, is open to individuals or enterprises so they can develop their own services or products based on it.

A beta version of the Kakao I Open Builder will launch at the end of October and a full-fledged version will be available by the first half of next year.

On Monday, Kakao accepted preorders for Kakao Mini, a virtual speaker also built on Kakao I, and a limited volume of 3,000 sold out in less than 40 minutes, underscoring KakaoTalk app’s enormous popularity in Korea.

Rim said although he appreciates such huge attention being given to the virtual assistant, he believes the interactive element of the device could do much more.

“Kakao is not an electronics device producer,” he said. “I don’t think the speaker is the most important. Its conversational interface could have so many possibilities beyond the virtual speaker. When numerous device makers start using Kakao I, users may expect the homogeneous level of experience with respective physical products and that’s where Kakao could expand its own ecosystem, connecting nearly 50 million KakaoTalk users.”

When a reporter asked if Kakao intends to remain in the domestic market, Rim said, “Overseas business is a romantic dream for me. I would really like to generate jaw-dropping achievement, but I am a realistic person. I think we should bring what should work abroad. But I already know Kakao won’t work.”

He cited the fact that each country already has firmly-rooted mobile messenger apps.

“Becoming the second or third most popular messenger app isn’t that significant,” he said. “What’s really important for us is growing into a platform for the majority of the population in Korea.”

Kakao tried in vain to win over users in Japan and Indonesia with its KakaoTalk messenger, but was defeated by Line, a Japanese subsidiary of Kakao’s domestic portal rival, Naver. But Rim added that he believes Kakao still holds a competitive edge in global markets when it comes to content such as mobile game, emoticons, webtoons and soap operas.

Such business areas are handled by different arms of Kakao, including the Daum portal site, which Kakao acquired in 2014.

Kakao Japan, for instance, is bracing to list on the Tokyo Stock Exchange as early as 2020 on the back of its success in manga, or Japanese graphic novels. The Japanese unit was founded in 2012.