Korea may be falling behind in global EV race

Korea may be falling behind in global EV race

As leading global automakers and governments are scrambling to increase their standings in the electric vehicle market, Korea is slowly slipping down the rankings in terms of both production and sales and could be in danger of losing its standing as a top vehicle manufacturer.

The global auto industry, which was mainly focused on fossil-fuel-run vehicles, received a wake-up call when Tesla came along in the 2000s. The company began producing electric vehicles in 2008 and environment issues started to receive more worldwide attention around the same time. As a result, petrochemical companies that initially opposed the development of electric vehicles as well as the governments of nations that were less concerned about environmental issues could no longer go against the tide.

China, the biggest auto market in the world, is already on track to completely remove fossil-fueled vehicles from its roads.

According to the South China Morning Post, Xin Guobin, China’s vice-minister of industry and information technology, said in a car forum in Tianjin earlier this month that Beijing is planning to “phase out fossil-fuel cars.” The country has already become the top player in the global electric vehicle market. A total of 204,584 vehicles operated by electricity - fully electric and plug-in hybrid - were sold during the first half of 2017 in China, the most in the world. “In 2016, China was by far the largest electric car market, accounting for more than 40 percent of the electric cars sold in the world,” said a recent report from the International Energy Agency.

Other nations that have already set the timer on fossil-fuel vehicles include Norway, India, the United Kingdom and France.

In Norway, only sedans and vans that do not generate any carbon emissions can be sold starting in 2025. Norway is currently the leader in terms of the portion that electric vehicles take up of total car sales in the country. A total of 99,286 cars were sold in Norway during the first half of this year. Out of them, 27,190, or about 27 percent, were electric vehicles.

India, the second largest country in the world by population, plans to only permit the sale of electric vehicles starting in 2030. Fossil-fuel vehicles will be completely banned from the United Kingdom and France as well, a policy set to take effect in both countries in 2040.

Other European nations that have their own electric car targets include Austria, Denmark, Ireland and the Netherlands, according to the International Energy Agency report. 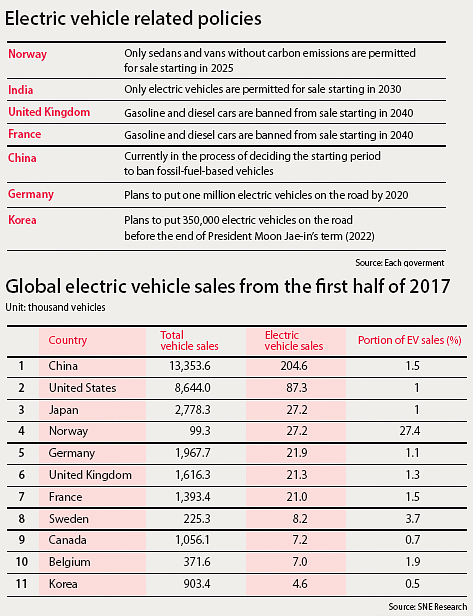 While the United States does not have a federal target for the expansion of electric cars, nearly 10 state governments have already adopted, or are in the process of adopting, related policies.

Compared to the effort by leading nations in Asia and Europe, the plans put forward by the Korean government seem insignificant, even though the country is No. 6 in the world in terms of automobile production.

The Korean government has set no clear timeline on when to ban fossil-fuel based vehicles from the road. The only related policy it has announced was a plan revealed earlier this year to expand the supply of electric cars before the end of President Moon Jae-in’s term to 350,000 vehicles. In the first half of this year, only about 4,500 electric cars were sold. Accounting for less than 0.5 percent of the entire car sale, the figure indicates electric vehicles are yet to find ground in the domestic market.

The issue of necessary infrastructure is often highlighted when it comes to electric vehicles in Korea. According to the Ministry of Environment, a total of 1,992 charging stations are installed nationwide as of Aug. 30.

Aside from weak government policy and a lack of infrastructure, experts say that local automakers are also falling behind global players in terms of electric vehicle technology.

During the motor show in Frankfurt, Germany, earlier this month, the booths of leading auto companies such as Audi, Volkswagen, BMW and Benz were filled with electric vehicle exhibitions. The Volkswagen Group announced during the show that it will produce as many as 80 electric vehicle models by 2025, earmarking over €20 billion ($23.8 billion) for the plan.

Volvo, a Swedish car company, said it will only sell electric cars starting in 2019.

Other car makers that are gaining ground in the industry include BYD of China, which Warren Buffet invested $230 million in for a 10 percent share in 2008. Chinese automakers including BYD have produced over 40 percent of the electric vehicles sold in China so far.

Hyundai Motor and Kia Motors, Korea’s top auto-making duo, have yet to make it into the top 10 in terms of global electric vehicle sales. Hyundai released the Ioniq Electric in March in the United States, but has only managed to sell 157 vehicles.

“The global auto industry has already adopted a competitive dynamic heavily centered on the development of electric vehicles,” said Kim Pil-soo, an automotive engineering professor at Daelim University. “Without expanding investment into research and development to increase the number of models with a competitive edge, [Korean car companies] will further fall behind in the global competition.”

Kim Ki-chan of Catholic University said “The government has to come up with a more detailed plan such as designating areas like Sejong City [where the main government administrative complex is located] to promote electric cars or provide more subsidies to have more electric taxis on the road.”