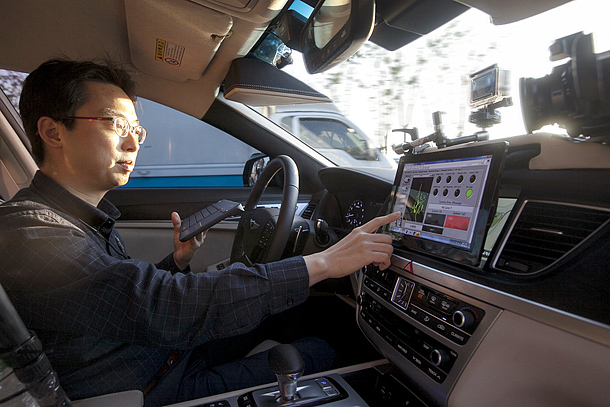 An SK Telecom researcher demonstrates self-driving technology on a vehicle that traveled between Yangjae-dong, southern Seoul and Suwon in Gyeonggi on Thursday. [SK TELECOM]

SK Telecom completed a test of its self-driving car technology on a 26-kilometer (16-mile) stretch of highway in the Seoul suburbs Thursday morning.

The test was the first since SK Telecom won approval from the Korean government in July to test its technology on public roads. A modified Genesis G80 sedan from Hyundai Motor embedded with SK Telecom’s autopilot technology drove from a service area in Yangjae-dong, southern Seoul, to an interchange in Suwon, Gyeonggi, between 7:15 a.m. and 7:48 a.m. at an average speed of 47 kilometers per hour (29 miles per hour), with the maximum legal limit for self-driving cars being 80.

The route the vehicle took is typically congested during commuting hours. One researcher took the driver’s seat and another participant sat next to him, as required by regulations. An SK Telecom spokesman said a human driver had to intervene twice, near the Seoul and Singal tollgates. “We plan to refine the system’s ‘route judgment’ technology so that the car can drive entirely on its own while passing the tollgates,” he said.

Park Jin-hyo, head of SK Telecom’s Network Technology R&D Center, said the company would continue testing its autopilot technology under other road conditions, including interregional expressways, and take steps to test automatic parking, considered especially challenging. “When a self-driving vehicle is connected to a 5G network under pilot operation, safety conditions will get better as it will facilitate communication between the car and the control center,” he said.

SK Telecom, Korea’s largest mobile carrier, has been ratcheting up its research in artificial intelligence and related areas ahead of 5G’s commercialization. It established an automobile technology research institute at the beginning of this year and was the first of the country’s three telecom companies to receive approval to test self-driving cars.

Other Korean companies, including Samsung Electronics, Hyundai Motor and Naver, as well as research labs at local universities including Seoul National University have recently jumped on the bandwagon of autopilot research.

There are currently 20 driverless cars running on Korean roads. Samsung obtained permission for road tests in May, and Naver Labs received approval in February.

Waymo, the self-driving car venture under Google’s parent company Alphabet, conducted the world’s first fully driverless test on public roads in 2015 and has gone so far as building a model city to test its self-driving cars.